Songs In The Key Of Life (studio album) by Stevie Wonder 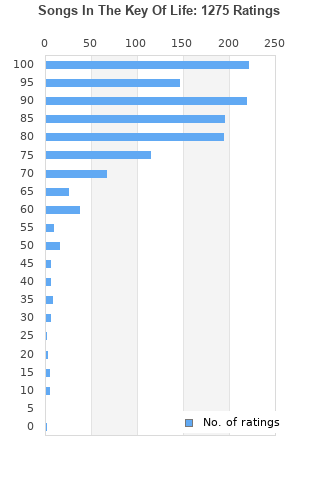 Stevie Wonder Songs in the Key of Life Double Album Motown 1976 Portugal Release
Condition: Used
Time left: 3h 3m 43s
Ships to: Worldwide
£20.63
Go to store
Product prices and availability are accurate as of the date indicated and are subject to change. Any price and availability information displayed on the linked website at the time of purchase will apply to the purchase of this product.  See full search results on eBay

Songs In The Key Of Life is ranked as the best album by Stevie Wonder.

Listen to Songs In The Key Of Life on YouTube 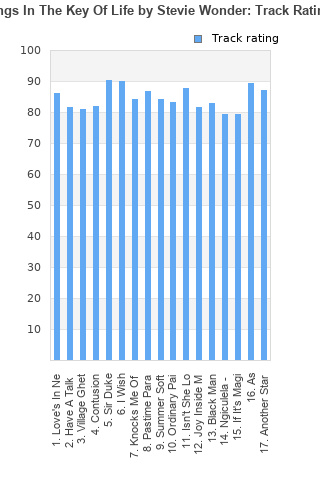 Songs In The Key Of Life rankings

Songs In The Key Of Life collection

Songs In The Key Of Life ratings

Rating metrics: Outliers can be removed when calculating a mean average to dampen the effects of ratings outside the normal distribution. This figure is provided as the trimmed mean. A high standard deviation can be legitimate, but can sometimes indicate 'gaming' is occurring. Consider a simplified example* of an item receiving ratings of 100, 50, & 0. The mean average rating would be 50. However, ratings of 55, 50 & 45 could also result in the same average. The second average might be more trusted because there is more consensus around a particular rating (a lower deviation).
(*In practice, some albums can have several thousand ratings)
This album is rated in the top 1% of all albums on BestEverAlbums.com. This album has a Bayesian average rating of 84.9/100, a mean average of 83.8/100, and a trimmed mean (excluding outliers) of 85.0/100. The standard deviation for this album is 14.7.

Songs In The Key Of Life favourites

Songs In The Key Of Life comments

Songs in the Key of Life is the rare case in which there is no real way to overhype the artist's achievement. Stevie Wonder's sound on this sprawling album draws seemingly effortlessly from funk, pop, jazz, and Latin styles. Tracks range from the fusion groove of “Contusion” to the delicate voice-and-harp duet “If It’s Magic.” Though more than 130 musicians are listed in the credits (including such stars as Herbie Hancock, George Benson, and Minnie Riperton), Songs in the Key of Life never strays from the singular, blazing vision of one artist. The sneaky pre-chorus in “Knocks Me Off My Feet,” the transcendent, spiraling rise of “As”—hooks pile on top of hooks, tucked irresistibly and unerringly into breaks, fills, and intros, most obviously on the album’s two biggest hits, the nostalgic, swaggering “I Wish” and the shout-out to Wonder’s jazz forebears “Sir Duke,” which quickly took up permanent residence in the repertoire of every marching band in the country. A landmark album by one of my favorite artists of the seventies.

An album full of summer vibes is exactly what you need during winter. Despite its length, it's extremely accessible. I guess that explains its commercial success, too. Also, it's hard to spot any strikingly weak tracks, all of them contribute to the overall warm and intimate atmosphere. However, there's enough diversity to keep the interest throughout, it has a wide range of a pop/soul/funk/jazz etc. background. I must say I 've never paid any attention to the lyrics, I suspect I may be missing on some important stuff.

The greatest album by Stevie Wonder (maybe along with Innervisions) the whole album is great, a bit too long (it’s a double album) with some ok songs like Ngiculela-Es Una Historia-I am Singing, Ebony Eyes and All Day Sucker.
The rest is from good to amazing. Love’s In Need of Love Today, Sir Duke, Knocks Me Off My Feet, Pastime Paradise, Summer Soft, Isn’t She Lovely, Joy Inside My Tears, If It’s Magic, As and Another Star are masterpieces. Obviously one of the greatest album of all time and one of my favorite. 9.5/10

One of my favorite albums ever. It is one of the weekly spins in my home!

I have always preferred the tighter tracklists of his earlier 70s albums, but this is definitely growing on me over time, as there are just so many undeniable tracks. White Album echoes, for sure.

Fav. Tracks: Love's In Need Of Love Today, Have A Talk With God, Contusion, Sir Duke, I Wish, Ordinary Pain, Black Man, As, Another Star.

This album has such a broad range of aspects. Social and political commentary on inequality, the joy of life collide alongside each other, but above all beautiful music expertly crafted, played and produced, a wonderful listen.

Your feedback for Songs In The Key Of Life