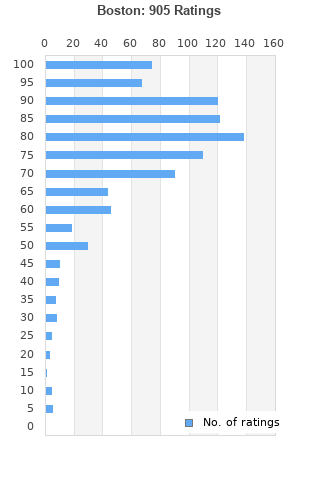 Boston is ranked as the best album by Boston. 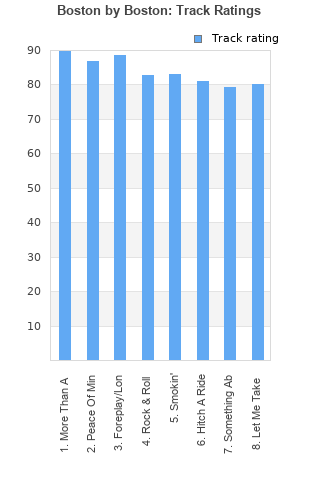 Rating metrics: Outliers can be removed when calculating a mean average to dampen the effects of ratings outside the normal distribution. This figure is provided as the trimmed mean. A high standard deviation can be legitimate, but can sometimes indicate 'gaming' is occurring. Consider a simplified example* of an item receiving ratings of 100, 50, & 0. The mean average rating would be 50. However, ratings of 55, 50 & 45 could also result in the same average. The second average might be more trusted because there is more consensus around a particular rating (a lower deviation).
(*In practice, some albums can have several thousand ratings)
This album is rated in the top 3% of all albums on BestEverAlbums.com. This album has a Bayesian average rating of 78.2/100, a mean average of 77.1/100, and a trimmed mean (excluding outliers) of 78.3/100. The standard deviation for this album is 17.1.

This is a good classic rock and great pop rock album, first three tracks set the bar very high, but rest of the album isn't much worse, just not that great.

Comfortably and undeniably in the top echelon of greatest guitar albums in history and there about’s in the conversation for greatest debut in history and greatest album - period. All quite remarkable considering Tom Scholt didn’t begin playing guitar until 21 years of age, that a large proportion of it was recorded in Toms basement studio and vocalist Brad Delp had only just joined the band following auditions to find a new front man. Ridiculous

Many adjectives come to front of mind to describe ‘Boston’ the album, big, bold, anthemic, timeless but the word that hits the nail on the head is …..

Known this album since the 80's and can't recall how I got into it - or even why I would go for this big rock sound - perhaps the solo's? Anyway - decades later I still love this album and this band.

There is nothing else out there like the band Boston. They have their own sound. Debut is an all-time great...unique. 100

One of the great debut albums and pop-rock albums ever. The epitome of the 70s rock scene before punk changed music.
Despite that this album is full of classic rock evergreens. Especially Peace of mine is even better than More Than a Feeling.

One of the most classic rock and roll albums in existence!!

Many a joint has been rolled on this album jacket.

Really powerful songwriting, production, performances, everything. Of course side 1 is some of the best hard rock ever put to tape, but I don't think side 2 is anything to scoff at either.

Your feedback for Boston