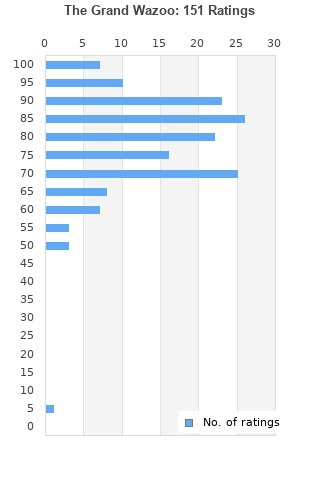 Frank Zappa and The Mothers: The Grand Wazoo (strongVG Bizarre MS-2093 LP)
Condition: Used
Time left: 21h 59m 15s
Ships to: Worldwide
$24.95
Go to store
Product prices and availability are accurate as of the date indicated and are subject to change. Any price and availability information displayed on the linked website at the time of purchase will apply to the purchase of this product.  See full search results on eBay

The Grand Wazoo is ranked 6th best out of 107 albums by Frank Zappa on BestEverAlbums.com.

The best album by Frank Zappa is Hot Rats which is ranked number 222 in the list of all-time albums with a total rank score of 8,676. 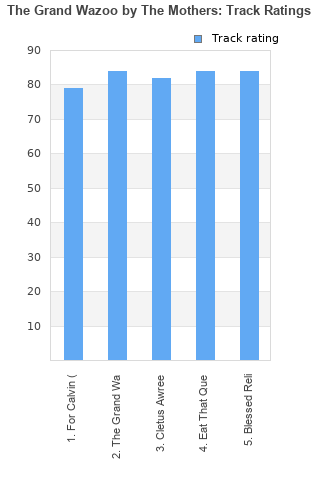 #
Track
Rating/Comments
1.
For Calvin (And His Next Two Hitch-Hikers)
Rating: 79 (13 votes)Comments:

Rating metrics: Outliers can be removed when calculating a mean average to dampen the effects of ratings outside the normal distribution. This figure is provided as the trimmed mean. A high standard deviation can be legitimate, but can sometimes indicate 'gaming' is occurring. Consider a simplified example* of an item receiving ratings of 100, 50, & 0. The mean average rating would be 50. However, ratings of 55, 50 & 45 could also result in the same average. The second average might be more trusted because there is more consensus around a particular rating (a lower deviation).
(*In practice, some albums can have several thousand ratings)
This album is rated in the top 2% of albums on BestEverAlbums.com. This album has a mean average rating of 79.0/100. The trimmed mean (excluding outliers) is 79.3/100. The standard deviation for this album is 11.9.

This and Waka Jawaka are my favourite Frank Zappa albums. I love the free form fusion jazz when I am in the right mood for it. I prefer Zappa's instrumental stuff although I have most of his albums. Depending on my mood, I enjoy most of his stuff, even the outright bizarre.

Musically amazing, another zany masterpiece from a master.

One of the best Zappa albums! My personal number 4. And one of the the best jazz albums ever. Completely underrated. While Zappa invented Jazz-Rock with Hot Rats, he drove it to perfection with this album

The best Zappa album of the Waka/Jawaka and Hot Rats period, Grand Wazoo is also one of the most underrated within his extensive canon. Although the playing is possibly not as strident or experimental as say the jazz of 'Weasels', it does not enter the realms of kitsch as is the case with the overrated Hot Rats.

Your feedback for The Grand Wazoo