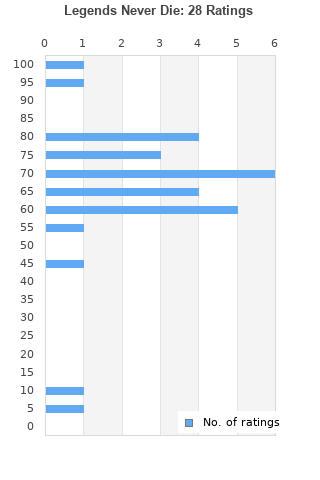 Legends Never Die is ranked 3rd best out of 4 albums by Juice WRLD on BestEverAlbums.com.

The best album by Juice WRLD is Goodbye & Good Riddance which is ranked number 6409 in the list of all-time albums with a total rank score of 201. 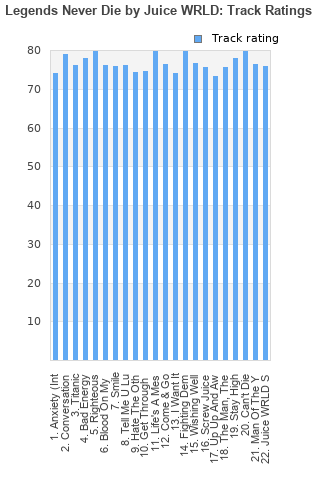 Rating metrics: Outliers can be removed when calculating a mean average to dampen the effects of ratings outside the normal distribution. This figure is provided as the trimmed mean. A high standard deviation can be legitimate, but can sometimes indicate 'gaming' is occurring. Consider a simplified example* of an item receiving ratings of 100, 50, & 0. The mean average rating would be 50. However, ratings of 55, 50 & 45 could also result in the same average. The second average might be more trusted because there is more consensus around a particular rating (a lower deviation).
(*In practice, some albums can have several thousand ratings)
This album has a Bayesian average rating of 68.0/100, a mean average of 66.0/100, and a trimmed mean (excluding outliers) of 66.0/100. The standard deviation for this album is 20.5.

I was not expecting to like this at all let alone be listening to it constantly since its release. From the opening moments of Conversation I realized I was really into the final songs of an artist who was taken at the start of his career. All the songs really drive home the sort of thought that were in Juice's mind on his final days. It gets downright touching on songs like Rightous and Wishing Well. Yet it has amazing bangers like Come & Go (seriously it's so driving) and the closer Man of the Year which leaves you feeling some hope after the mostly sad album.

Your feedback for Legends Never Die