Place Without A Postcard (studio album) by Midnight Oil 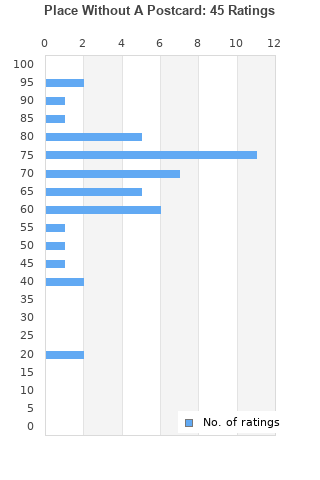 Place Without A Postcard is ranked 6th best out of 28 albums by Midnight Oil on BestEverAlbums.com.

The best album by Midnight Oil is Diesel And Dust which is ranked number 968 in the list of all-time albums with a total rank score of 1,923. 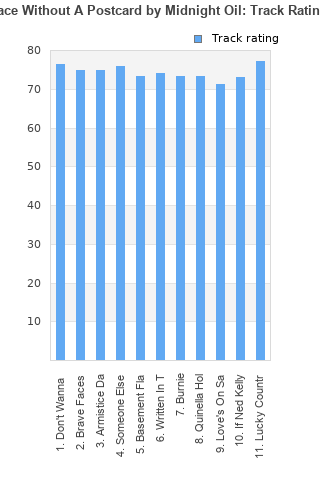 Place Without A Postcard rankings

Place Without A Postcard collection

Place Without A Postcard ratings

Rating metrics: Outliers can be removed when calculating a mean average to dampen the effects of ratings outside the normal distribution. This figure is provided as the trimmed mean. A high standard deviation can be legitimate, but can sometimes indicate 'gaming' is occurring. Consider a simplified example* of an item receiving ratings of 100, 50, & 0. The mean average rating would be 50. However, ratings of 55, 50 & 45 could also result in the same average. The second average might be more trusted because there is more consensus around a particular rating (a lower deviation).
(*In practice, some albums can have several thousand ratings)
This album has a Bayesian average rating of 69.3/100, a mean average of 68.5/100, and a trimmed mean (excluding outliers) of 68.5/100. The standard deviation for this album is 16.3.

Place Without A Postcard favourites

Place Without A Postcard comments

The 1st MO album I ever heard the 1st one I loved .Even today its great. Some classic MO tracks here: ' Don't Wanna Be The One ' , 'Armistice Day' and the GREAT 'Lucky Country' . This album is superb .

A superior rock album to Led Zep IV. Basement Flat one of the greatest anthems ever recorded. Pity next to no one knows.

Keyboards, words and guitars work well together. Neat little package and at the right address. Can't see the heights from other albums. Hardly going to disappoint a big Midnight Oil fan. Must say 'If Ned Kelly Was King' is interesting song indeed.

Your feedback for Place Without A Postcard