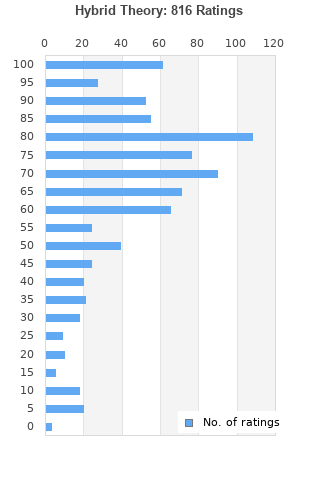 Hybrid Theory is ranked as the best album by Linkin Park. 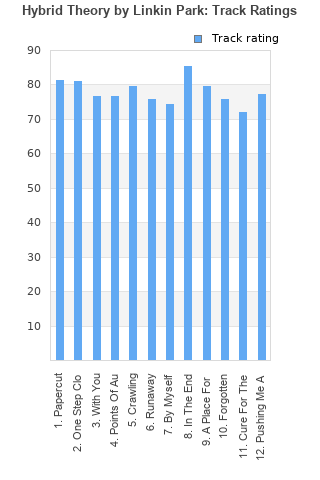 Rating metrics: Outliers can be removed when calculating a mean average to dampen the effects of ratings outside the normal distribution. This figure is provided as the trimmed mean. A high standard deviation can be legitimate, but can sometimes indicate 'gaming' is occurring. Consider a simplified example* of an item receiving ratings of 100, 50, & 0. The mean average rating would be 50. However, ratings of 55, 50 & 45 could also result in the same average. The second average might be more trusted because there is more consensus around a particular rating (a lower deviation).
(*In practice, some albums can have several thousand ratings)
This album has a Bayesian average rating of 66.1/100, a mean average of 66.1/100, and a trimmed mean (excluding outliers) of 66.1/100. The standard deviation for this album is 23.6.

One of my guilty pleasures. Sure it's not the greatest music in the world, but for what it is it's very cohesive, well written, and performed.
The album was a gamechanger and definitely had it's influence on rock music.

Honestly surprised at how low this album is rated here. Fantastic debut.

Surprised how low this album is rated on this site (maybe general disdain for nu metal plays some part?). This album was a staple of my childhood and it still hasn't got old on me. Talk about a trailblazing album - nothing like this had ever been made before and as far as my ears can tell nothing has ever come close since. The highlights are Papercut and In The End.

Amazing album that keep your attention from first to last track, like driving fast thru your most haunting moments.

I was a baby when this album came out. But even I remember "In The End" and "One Step Closer" - they seem perfectly etched into culture. While I'm a Meteora guy personally, this is a great album with some strong singles and great deep cuts. "With You", "One Step Closer", "Papercut", "In The End", "A Cure for the Itch" and "Points of Authority" are my favourite tracks of the album. Not much of a fan of "Crawling" though - the song has not aged well at all.

The best album in the world, if you are a teenager. If you get past this stage, it loses most of its appeal, but I still have to give it some extra points for what it used to be, the memories and the nostalgia. Overall, 65/100.

That is my review.

Classic Nu-Metal Album, Best Album of Linkin Park, that's my childhood, now I grow up, but memories about that record are still living in my mind, album was one of the coolest record on that moment in Russia, now its absolutely pop record, but still classic

Your feedback for Hybrid Theory