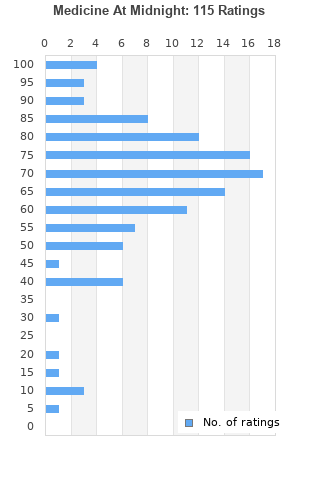 Foo Fighters – Medicine At Midnight Limited Edition Exclusive [LP] Vinyl
Condition: New
Time left: 12h 3m 50s
Ships to: Worldwide
$20.50
Go to store
Product prices and availability are accurate as of the date indicated and are subject to change. Any price and availability information displayed on the linked website at the time of purchase will apply to the purchase of this product.  See full search results on eBay

Medicine At Midnight is ranked 14th best out of 15 albums by Foo Fighters on BestEverAlbums.com.

The best album by Foo Fighters is The Colour And The Shape which is ranked number 328 in the list of all-time albums with a total rank score of 5,995. 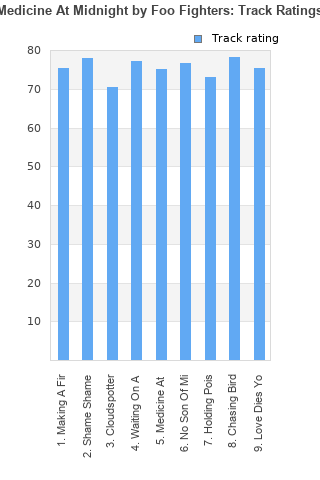 Rating metrics: Outliers can be removed when calculating a mean average to dampen the effects of ratings outside the normal distribution. This figure is provided as the trimmed mean. A high standard deviation can be legitimate, but can sometimes indicate 'gaming' is occurring. Consider a simplified example* of an item receiving ratings of 100, 50, & 0. The mean average rating would be 50. However, ratings of 55, 50 & 45 could also result in the same average. The second average might be more trusted because there is more consensus around a particular rating (a lower deviation).
(*In practice, some albums can have several thousand ratings)
This album has a Bayesian average rating of 70.8/100, a mean average of 70.4/100, and a trimmed mean (excluding outliers) of 70.4/100. The standard deviation for this album is 12.5.

Not that I've been following them fanatically at any point of their career, but this sounded refreshingly different from what I remembered from them, credit is due for mixing it up.

A bit of a slight step into a poppier sound, but not a bold enough of a choice that the Foo Fighters' trademarks are lost. Medicine at Midnight is consistently pleasing, but doesn't really have any standout tracks. Its just a quick and fun listen.

On first listen, it's a record that only seems to spark into life every so often. Overall, it seems to have a softer and poppier feel and is a reasonable progression from where they were with Concrete & Gold. The band still sound like they are having fun and, with the Foos, that's the point. Having given the record a few more listens, the songs come alive a lot more readily. There are some genuinely good grooves on here and it is a much more rounded album than C&G, which gradually became less pleasing to my ear. Their live show will still be unmissable...eventually.

This is by far the worst album in their discography in my opinion. Really weak effort, I feel completely disappointed.

It's ok. Not great, not bad

This was alright. Nothing special, but up to par with what I was expecting from them.

Responding to the comment below, this band has no contractual obligations. Dave Grohl has had creative control over everything since day one. He started his own record label (Roswell Records) when he started the band in 1995 and it's been on that label since. They only use RCA for distribution purposes.

So please, enough about the contractual or corporate crap. Being a corporate band is making the album you're TOLD to make. Nobody tells them what to make. Dave Grohl is also 52 years old. People change. You think Kurt Cobain would be writing Teen Spirit part four at age 54?

I avoided the comments before listening to the album but within a few tracks the words ‘contractual obligation’ reared their ugly head. Lo and behold, the astute lylecatcliffe had beaten me to it.

This is the music equivalent of WFH, firing off a couple of pre 9am and post 530pm emails, then spending the rest of the day lounging on the sofa, with a huge tin of sickly Quality Street, whilst trying to climax to back-to-back episodes of Homes Under The Hammer.

I've never been a massive Foo Fighters fan - their debut being underrated and excellent and the Colour and the Shape being their best work, a smattering of great singles since and a great creative spark of innovation with Wasting Light - I wouldn't really call them an "albums" band. I saw them live in a stadium in 2018 (I was actually their for the support slot, but I wasn't calling it an early night) and they were absolutely incredible live.

Unlike the shot in the arm that was 2011's Wasting Light, this album doesn't feel essential but merely contractual. The title track sounds like an 80s throwback song without direction, No Son of Mine is a Motorhead rip off without the permission this time around and Cloudspotter sounds like if you put Foo Fighters 00s - 10s albums into a computer and an AI bot composited it into a single track.

Not a terrible listen, but I doubt I'll find a reason to ever want to hear it again.

Your feedback for Medicine At Midnight