The Colour And The Shape (studio album) by Foo Fighters

The Colour And The Shape by Foo Fighters
Year: 1997
Overall rank: 340th 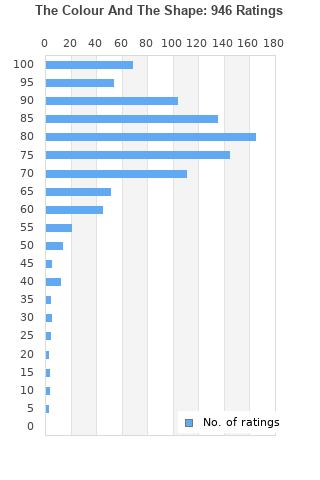 The Colour And The Shape is ranked as the best album by Foo Fighters. 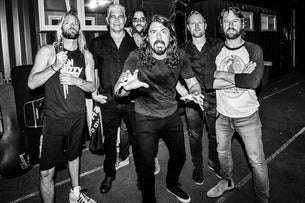 Listen to The Colour And The Shape on YouTube 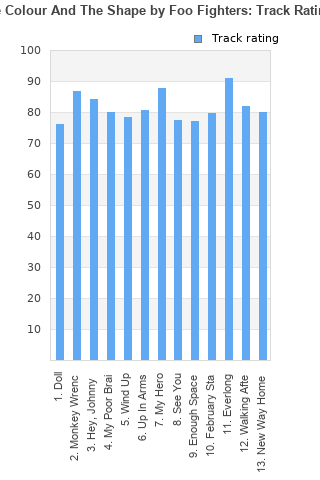 The Colour And The Shape rankings

The Colour And The Shape collection

The Colour And The Shape ratings

Rating metrics: Outliers can be removed when calculating a mean average to dampen the effects of ratings outside the normal distribution. This figure is provided as the trimmed mean. A high standard deviation can be legitimate, but can sometimes indicate 'gaming' is occurring. Consider a simplified example* of an item receiving ratings of 100, 50, & 0. The mean average rating would be 50. However, ratings of 55, 50 & 45 could also result in the same average. The second average might be more trusted because there is more consensus around a particular rating (a lower deviation).
(*In practice, some albums can have several thousand ratings)
This album is rated in the top 3% of all albums on BestEverAlbums.com. This album has a Bayesian average rating of 78.5/100, a mean average of 77.4/100, and a trimmed mean (excluding outliers) of 78.6/100. The standard deviation for this album is 15.3.

The Colour And The Shape favourites

The Colour And The Shape comments

This album opens brilliantly with the short but snappy Doll that then leads into two of the best songs the Foo Fighters have ever released. These are Monkey Wrench and the greatly under rated Hey, Johnny Park!. Both of these songs are energetic and have amazing instrumentation mixed in with some incredible vocals. They are both so much fun and are part of one of the best openings to an album ever. You then get this level of quality scattered amongst the rest of the tracks. There are quite a few gems you can find on this release as well which make for great listening outside of the record. However, it can be a little inconsistent with there being a fair few number of filler tracks. It is also quite bloated at a 50 minute run time which makes it get quite repetitive. Overall, this is an elite record and is possibly the Foo Fighters best ever release.

This album is terrific on its own, but more significant in that it opened up everything musically and production-wise for the Foo Fighters. It totally changed the landscape of rock for the next 10+ years.

A very safe, but good rock album. Some stand out tracks, accompanied by other decent and ok songs.

There was always a certain radio-friendliness to Nirvana's sound that Kurt could handle well enough not to make them look like wannabe punks, it actually defined their style in a way... Dave can't.

Dave has found himself a band and emerges better as a front man and that benefits the quality of the music. You can hear more experience on this album than on the raw debut. Some of the bands best songs come from this album.

Everlong is obviously amazing and worthy of every bit of hype it gets.

Really good album, with consistently really good songs start to finish. Can't list favorites because it's well more than half the album.

Your feedback for The Colour And The Shape