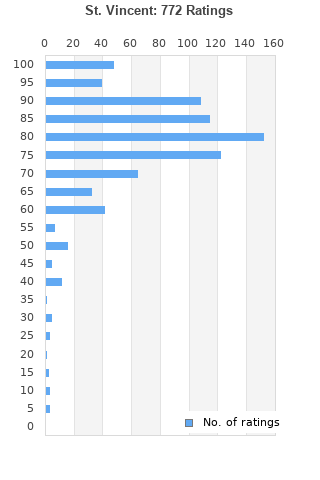 St. Vincent is ranked as the best album by St. Vincent. 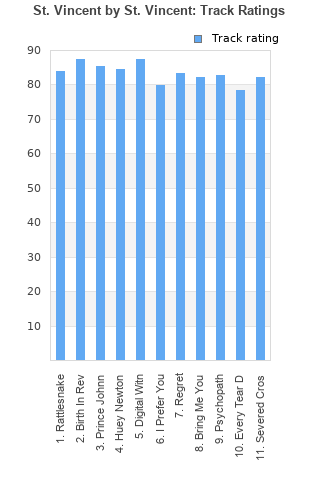 Rating metrics: Outliers can be removed when calculating a mean average to dampen the effects of ratings outside the normal distribution. This figure is provided as the trimmed mean. A high standard deviation can be legitimate, but can sometimes indicate 'gaming' is occurring. Consider a simplified example* of an item receiving ratings of 100, 50, & 0. The mean average rating would be 50. However, ratings of 55, 50 & 45 could also result in the same average. The second average might be more trusted because there is more consensus around a particular rating (a lower deviation).
(*In practice, some albums can have several thousand ratings)
This album is rated in the top 2% of all albums on BestEverAlbums.com. This album has a Bayesian average rating of 79.0/100, a mean average of 77.8/100, and a trimmed mean (excluding outliers) of 79.1/100. The standard deviation for this album is 15.1.

A rare instance of a musician who gets better with practically every album.


People turn the TV on, it looks just like a window,
yeah

People turn the TV on, it looks just like a window,
yeah

The best album from one of our times most important artists, who’s is also an underrated guitar maestro ( if you don’t believe me check out any live performance on YouTube)

Of all her albums this one sounds the most forced. It all has to be so arty and in-your-face which just really doesn’t match with her voice. She somewhat lacks the theatrical qualities of Madonna to mark a change in the music and/or theme with her vocals too. There are some points where she clearly tries (“Huey Newton”), but again: forced.

Annie Clark, a.k.a. St. Vincent, has consistently delivered quality throughout her career, and on this self-titled album she sharpens her music's edges to near perfection. In her review for Pitchfork, Lindsay Zoladz writes, "St. Vincent continues Clark's run as one of the past decade's most distinct and innovative guitarists, though she's never one to showboat. Her harmonic-filled style bears the influence of jazz (she picked up a lot of her signature tricks from her uncle, the jazz guitarist Tuck Andress) and prog rock, two genres known to embrace sprawl. But Clark's freak-outs are tidy, modular and architecturally compact—like King Crimson rewritten by Le Corbusier." That's a very fine summary of what this album does well, and it's truly enjoyable to hear an artist in peak form, as Clark is on just about every track here.

This is my favorite album of the 2010s, experimental yet accesible, with catchy riff mixed with crazy fuzzed guitars. The only song that doesn´t get the same excitement is Huey Newton, which it´s too crazy for it´s own good, but the rest is all gold.

The first half of this album was so much stronger than the 2nd half. It will be interesting to see where she goes next. Great guitar work and futuristic sounding alternative rock album w/ commentary on the world of social media and the digital age.

Your feedback for St. Vincent