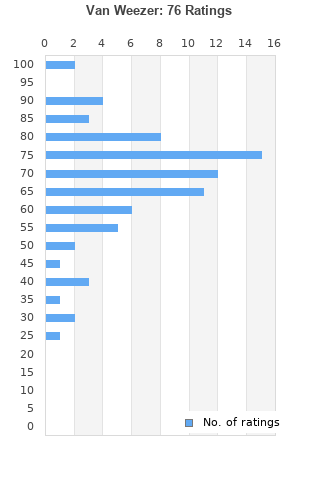 WEEZER - VAN WEEZER (CD, 2021)
Condition: Like New
Time left: 2d 22h 56m 37s
Ships to: Worldwide
£9.00
Go to store
Product prices and availability are accurate as of the date indicated and are subject to change. Any price and availability information displayed on the linked website at the time of purchase will apply to the purchase of this product.  See full search results on eBay

Van Weezer is ranked 18th best out of 21 albums by Weezer on BestEverAlbums.com.

The best album by Weezer is Weezer (The Blue Album) which is ranked number 69 in the list of all-time albums with a total rank score of 21,272. 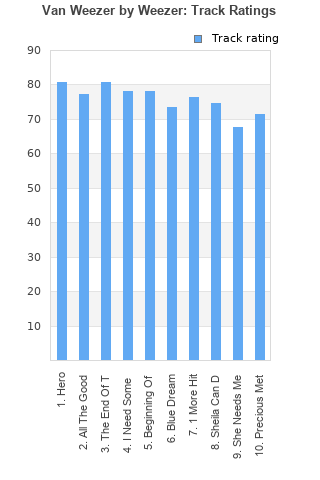 Rating metrics: Outliers can be removed when calculating a mean average to dampen the effects of ratings outside the normal distribution. This figure is provided as the trimmed mean. A high standard deviation can be legitimate, but can sometimes indicate 'gaming' is occurring. Consider a simplified example* of an item receiving ratings of 100, 50, & 0. The mean average rating would be 50. However, ratings of 55, 50 & 45 could also result in the same average. The second average might be more trusted because there is more consensus around a particular rating (a lower deviation).
(*In practice, some albums can have several thousand ratings)
This album has a Bayesian average rating of 71.8/100, a mean average of 71.0/100, and a trimmed mean (excluding outliers) of 71.1/100. The standard deviation for this album is 12.1.

This album really grew on me. It's such a fun record! :)

Pretty catchy and fun, exactly like we could have expected. Quite good for their second best album of the year.

I Need Some Of That is just crazy good.

Sure, it's not a masterpiece like OK Human, but there is a lot to admire about this record. Most of the melodies on this album are infectious and just harmless, good fun. But I am not disappointed because it's not like the songs were written after the exceptional OK Human, and some songs on this are actually pretty great, my favourite being Beginning of the End, which I absolutely love (the Wyld Stallyns edit is fantastic).

Quirky, inoffensive stuff - if extremely forgettable in the latter half. Someone out there will absolutely adore this record for sure, sadly, that someone isn't me.

This is actually pretty good? The first half pulls of nonsensical guitar heroism (almost) flawlessly. Think Raditude meets the good Weezer albums and this is what you get

It's Weezer so I'm going to listen to this a hundred times. But OK Human set the bar really high and, based on the singles, I'm not sure if VW will be able to meet it

Your feedback for Van Weezer