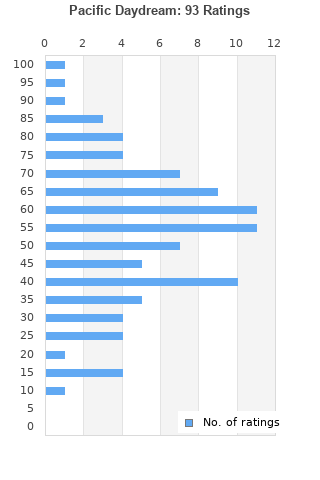 Pacific Daydream is ranked 11th best out of 24 albums by Weezer on BestEverAlbums.com.

The best album by Weezer is Weezer (The Blue Album) which is ranked number 74 in the list of all-time albums with a total rank score of 19,224. 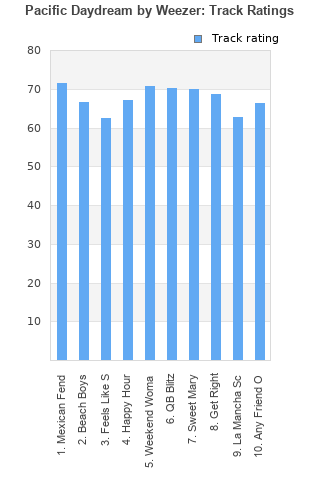 Rating metrics: Outliers can be removed when calculating a mean average to dampen the effects of ratings outside the normal distribution. This figure is provided as the trimmed mean. A high standard deviation can be legitimate, but can sometimes indicate 'gaming' is occurring. Consider a simplified example* of an item receiving ratings of 100, 50, & 0. The mean average rating would be 50. However, ratings of 55, 50 & 45 could also result in the same average. The second average might be more trusted because there is more consensus around a particular rating (a lower deviation).
(*In practice, some albums can have several thousand ratings)
This album has a Bayesian average rating of 55.3/100, a mean average of 53.3/100, and a trimmed mean (excluding outliers) of 53.3/100. The standard deviation for this album is 19.2.

After two albums that largely helped Weezer reach their former glory, the band decided for another major U-turn with the release of Pacific Daydream. Gone are the loud guitars and heavy drums and present are overly produced songs with a pop-rock vibe and a very modern electro-pop sound. Pacific Daydream stays upright thanks to its strong singles, but the rest of the songs are disappointing. There are fine melodies here, and catchy choruses as ever, but with this album, Weezer has taken a step closer towards other modern rock bands, rather than staying in their own niche.
Change is good, and in terms of sound and production, this album (and to an extent, The Black Album as well) this album certainly marks a fresh take on Weezer's music. The approach works fine on the first half, but the second half is nothing but mainstream pop-rock.
The biggest problems for me personally are the hip-hop and electro-pop influences that sadly turn Weezer into just another The Chainsmokers copy. There are fine moments here and catchy summer-time songs, but I can't help but find it a bit disappointing after the stellar White Album.

Production ruins a perfectly good album, still enjoy it though, just not as much as I could

If you were expecting a rock record, then that's your own fault. It's Weezer's most experimental record and it works in some places (Happy Hour, Weekend Woman, Sweet Mary) and doesn't in others (Beach Boys, La Mancha Screwjob.)

It's not a bad album, it's just meh. It sounds like Weezer, minus the rock sound. It's not nearly as bad as some think.

Not their best album but I love the tracks such as QB Blitz, Sweet Mary, La Mancha Screwjob.

I keep forgetting this exists.

Sweet Mary is wonderful y'all are tripping

A huge misstep in the Weezer catalog. A shallow, overproduced record that does nothing in the way of raising the bar or being creative. Overwhelmingly a disappointing release for an otherwise competent band.

Oh geez. I second the ratitude comment. It's like they didn't learn. There was hope with Everything will be alright in the end. I even was bored with the White Album (sorry). But this is just as bad as Ratitude. I didn't know they were doing a Black album. Hoping as well that it is as good as EWBAITE or Red album at least. Probably not coming back.

Your feedback for Pacific Daydream