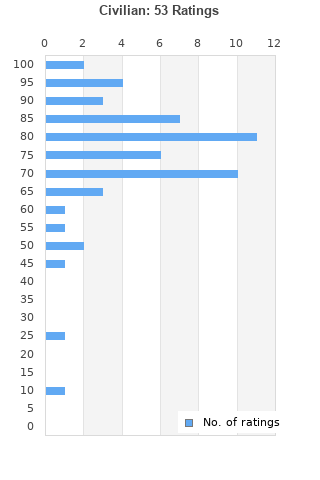 WYE OAK - CIVILIAN VINYL LP
Condition: New
Time left: 2d 4h 29m 14s
Ships to: Worldwide
$18.19
Go to store
Product prices and availability are accurate as of the date indicated and are subject to change. Any price and availability information displayed on the linked website at the time of purchase will apply to the purchase of this product.  See full search results on eBay

Civilian is ranked as the best album by Wye Oak. 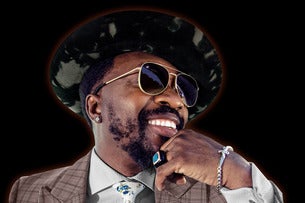 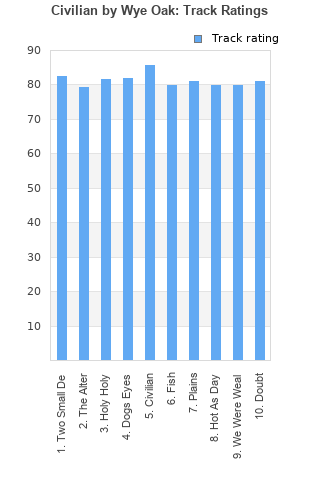 Rating metrics: Outliers can be removed when calculating a mean average to dampen the effects of ratings outside the normal distribution. This figure is provided as the trimmed mean. A high standard deviation can be legitimate, but can sometimes indicate 'gaming' is occurring. Consider a simplified example* of an item receiving ratings of 100, 50, & 0. The mean average rating would be 50. However, ratings of 55, 50 & 45 could also result in the same average. The second average might be more trusted because there is more consensus around a particular rating (a lower deviation).
(*In practice, some albums can have several thousand ratings)
This album is rated in the top 6% of all albums on BestEverAlbums.com. This album has a Bayesian average rating of 76.7/100, a mean average of 75.0/100, and a trimmed mean (excluding outliers) of 77.4/100. The standard deviation for this album is 16.3.

Pretty good, but not too diverse.

There is something just really mesmerizing about this album. It has moments of being pretty straight forward rock. There are also a lot of really emotional and gorgeous atmospheric parts. There is something so gorgeously sincere about Jenn Wasner's vocals. I just feel like I know and understand her when she sings so plainly and beautifully and naturally. This is just a record I really love and relate to. Nothing about it seems overly conceptualized, nor does anything here seem superficial. It's just the perfect balance of the elements of the upfront and the introspective.

So glad i gave this a try. I found out about the lead singer from a song by Titus Andronicus she was featured in, and i was curious if her band was any good. Needless to say i was pleasantly surprised.
This album is so atmospheric and beautiful and wondrous. However, it also has perfectly timed moments of powerful, bad-ass climaxes that leave on floored.
Basically, it is elegant, but can kick your ass if it wanted to.
i would suggest headphones and high volume on this one.

This is the soundtrack to taking an underwater sabbatical. If it were possible to solitarily trek the depths of the ocean, this would be the musical statement to such a strangely nautical experience. Really. Maybe it's just the album cover, but that's the sensation that this record offers. Civilian is truly an unearthly creation in the best way possible.

Throw this one in, close your eyes, and feel the dense atmoshpherics swell around you. I can't think of three better songs in succession on an album than "Holy Holy", "Dogs Eyes" and "Civilian".

Your feedback for Civilian