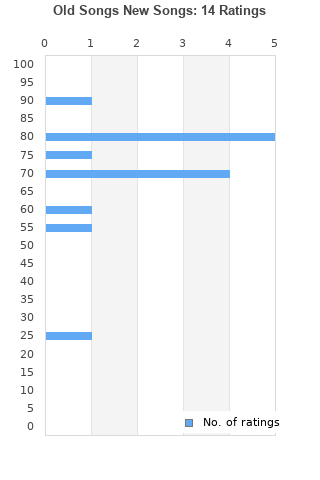 FAMILY, OLD SONGS NEW SONGS, 1971, VERY GOOD+ CONDITION
Condition: Used
Time left: 10h 50m 7s
Ships to: Worldwide
£9.99
Go to store
Product prices and availability are accurate as of the date indicated and are subject to change. Any price and availability information displayed on the linked website at the time of purchase will apply to the purchase of this product.  See full search results on eBay

Old Songs New Songs is ranked 7th best out of 9 albums by Family on BestEverAlbums.com.

The best album by Family is Music In A Doll's House which is ranked number 4926 in the list of all-time albums with a total rank score of 270. 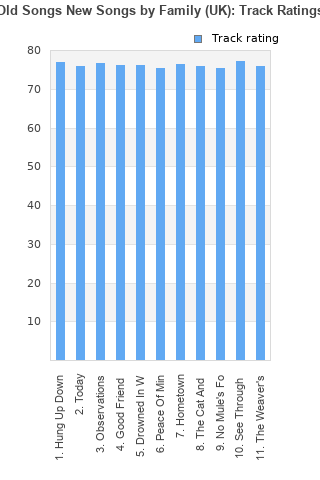 Rating metrics: Outliers can be removed when calculating a mean average to dampen the effects of ratings outside the normal distribution. This figure is provided as the trimmed mean. A high standard deviation can be legitimate, but can sometimes indicate 'gaming' is occurring. Consider a simplified example* of an item receiving ratings of 100, 50, & 0. The mean average rating would be 50. However, ratings of 55, 50 & 45 could also result in the same average. The second average might be more trusted because there is more consensus around a particular rating (a lower deviation).
(*In practice, some albums can have several thousand ratings)
This album has a Bayesian average rating of 71.2/100, a mean average of 69.6/100, and a trimmed mean (excluding outliers) of 69.6/100. The standard deviation for this album is 15.6.

"Old Songs New Songs" was originally a compilation album consisting of singles and alternate versions of album tracks. This is why the album regularly cited as an original album, as there is no direct overlap in relation to the four albums Family had released at the release of it in 1971.

However you categorize the album, it belongs among Family's strongest. Perhaps the most homogeneous, without any weak numbers.

Besides the very fine single-tracks "Hometown," "No Mule's Fool" and "Good Friend of Mine" it is a scoop to get "Observations From a Hill" with Roger Chapman on lead vocals.

The only annoyance is that the songs are not remastered to the same fine sound quality, as the group's other albums. Comparing CD 1 containing the original "Old Songs New Songs", with the other CDs on the box, it is very obvious to notice the difference.

Apart from these alternate versions, the box contains no tracks from the group's first two albums, which is slightly odd, since these are among the band's finest. Has probably got something to do with rights.

Otherwise the build-up is a good mixture of great album tracks, singles and previously unreleased demos. I you do not absolutely need to have everything with the group, you are with this box well covered.

There is a fine and detailed biography of the group, old interviews, photos, etc. If you wish to know where the individual songs originally come from it requires a little extra research, as this is not listed on the box.

All in all a fine release, though it is a little frustrating that the original "Old Songs New Songs" numbers do not sound as good as the rest.