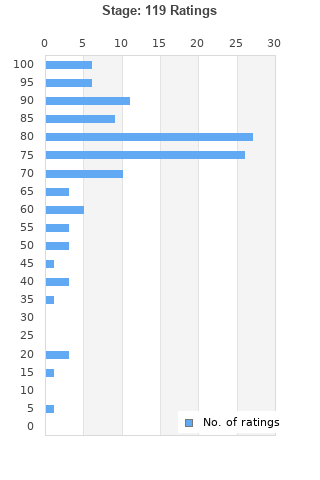 David Bowie ‎– Stage LP
Condition: Used
Time left: 3h 2m 14s
Ships to: Worldwide
$25.00
Go to store
Product prices and availability are accurate as of the date indicated and are subject to change. Any price and availability information displayed on the linked website at the time of purchase will apply to the purchase of this product.  See full search results on eBay

Stage is ranked 26th best out of 84 albums by David Bowie on BestEverAlbums.com.

The best album by David Bowie is The Rise And Fall Of Ziggy Stardust And The Spiders From Mars which is ranked number 9 in the list of all-time albums with a total rank score of 60,358. 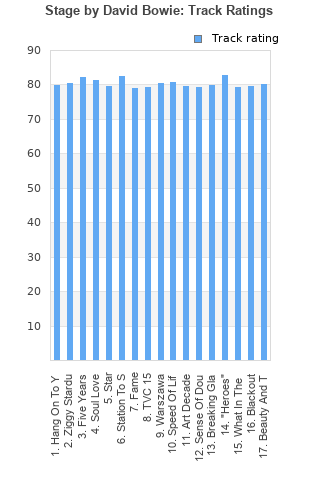 Rating metrics: Outliers can be removed when calculating a mean average to dampen the effects of ratings outside the normal distribution. This figure is provided as the trimmed mean. A high standard deviation can be legitimate, but can sometimes indicate 'gaming' is occurring. Consider a simplified example* of an item receiving ratings of 100, 50, & 0. The mean average rating would be 50. However, ratings of 55, 50 & 45 could also result in the same average. The second average might be more trusted because there is more consensus around a particular rating (a lower deviation).
(*In practice, some albums can have several thousand ratings)
This album is rated in the top 5% of all albums on BestEverAlbums.com. This album has a Bayesian average rating of 76.8/100, a mean average of 74.5/100, and a trimmed mean (excluding outliers) of 77.2/100. The standard deviation for this album is 18.1.

Competent if not riveting live album from Bowie. The, Low, tracks are the most interesting, hearing them delivered in a more conventional 'band' sense than the more produced versions of the studio recordings. All in all, a bit pointless and underwhelming but certainly not a bad album at all. For Bowie completists only.

Sounds a bit half arsed apart from the material from station to station.

A great live album of Mr. Bowie during one of his most creative an experimental periods. Highly recommended.

Interesting versions of Low material plus a run through the most famous Hunky/Ziggy-era songs. Grear quality. Much recommended.

I like how are all smarty arty stuff is put in with the rest of the music at the rock show. It sounds like it went down quite well. I liked this little show by David Bowie. Even The Doors cover sounded fab!

Your feedback for Stage