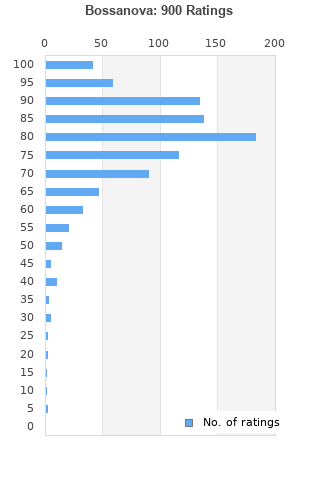 Bossanova is ranked 3rd best out of 25 albums by Pixies on BestEverAlbums.com.

The best album by Pixies is Doolittle which is ranked number 19 in the list of all-time albums with a total rank score of 42,239. 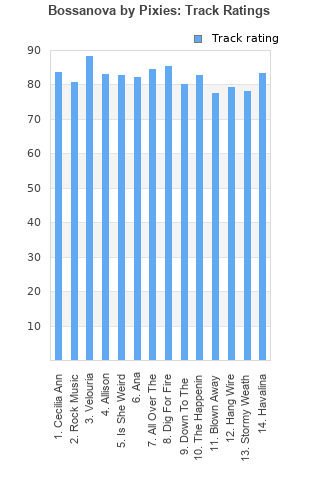 Rating metrics: Outliers can be removed when calculating a mean average to dampen the effects of ratings outside the normal distribution. This figure is provided as the trimmed mean. A high standard deviation can be legitimate, but can sometimes indicate 'gaming' is occurring. Consider a simplified example* of an item receiving ratings of 100, 50, & 0. The mean average rating would be 50. However, ratings of 55, 50 & 45 could also result in the same average. The second average might be more trusted because there is more consensus around a particular rating (a lower deviation).
(*In practice, some albums can have several thousand ratings)
This album is rated in the top 2% of all albums on BestEverAlbums.com. This album has a Bayesian average rating of 79.2/100, a mean average of 78.4/100, and a trimmed mean (excluding outliers) of 79.3/100. The standard deviation for this album is 14.0.

Significantly weaker than Surfer Rosa and Doolittle. The intense sense of spontaneity is no longer present.

Of the four full-length albums released by the Pixies during their heyday (here I'm not counting the classic EP Come on Pilgrim), Bossanova is the one with which I've spent the least amount of time. It's much more of a straightforward rock album than either Surfer Rosa or Doolittle, meaning it lacks some of the bizarre quirks that make those albums such unique listening experiences. But it's much more recognizably a true Pixies album than Trompe le Monde, which feels at times like a Frank Black solo project (albeit one that utilizes his strengths far better than most of his actual solo material). On “Havalina,” the song's narrator spots a javelina—an ornery wild pig common in the southwestern desert landscapes that seem to inspire much of the album—walking across a plain. The music is a slow dance between celestial bodies, heavenly but melancholic. He sees the boar, and in two short lines, the song is over. Songs on Bossanova are triumphs of minute, private epiphany: small, diamond-bright moments that flash in the listener's ear and fade away.

There's something special about this album. I like it almost as much as Doolittle and Surfer Rosa. The surf sound works for me, and I like that the songs are a little less aggressive. Gets overlooked for obvious reasons, but don't forget about this one, it's classic Pixies.

Prefer this overall to Surfer Rosa (although fewer standout moments), but it's all personal preference.

Only started to listen to the Pixies in 2017 with Come on Pilgrim and Surfer Rosa and then more recently Doolittle. Their energetic and frantic songs took a wee while for me to penetrate however I find this album much more accessible.
Favs are Velouria; All Over The World; The Happening; Stormy Weather and Havalina

This is a good record. However for rock music, I'm not that crazy about it. Hell, the song Rock Music just isn't good. And with songs like Hang Wire, Down To The Well and Allison, there are these weird quips that kinda capsize the songs for me. Hang Wire just ends abruptly, the vocal opening for Allison is just bizarre and Down the Well has this weird sound that I can't describe but just gets to me for some reason. But the standouts are still good. Just somewhat rudimentary.

Your feedback for Bossanova