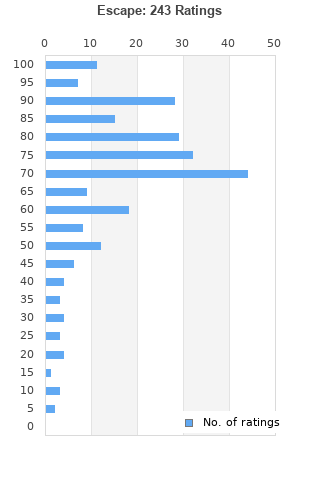 Live in Houston 1981: Escape Tour by Journey (CD, 2005, Sony)
Condition: Brand New
Time left: 3h 45m 20s
Ships to: Worldwide
$9.98
Go to store
Product prices and availability are accurate as of the date indicated and are subject to change. Any price and availability information displayed on the linked website at the time of purchase will apply to the purchase of this product.  See full search results on eBay

Escape is ranked as the best album by Journey. 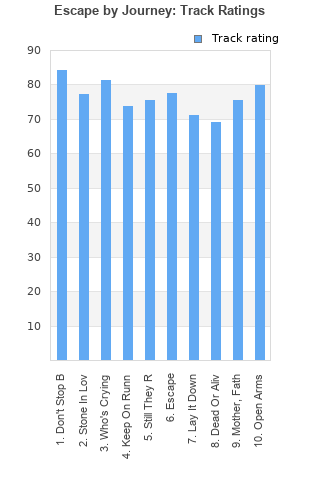 Rating metrics: Outliers can be removed when calculating a mean average to dampen the effects of ratings outside the normal distribution. This figure is provided as the trimmed mean. A high standard deviation can be legitimate, but can sometimes indicate 'gaming' is occurring. Consider a simplified example* of an item receiving ratings of 100, 50, & 0. The mean average rating would be 50. However, ratings of 55, 50 & 45 could also result in the same average. The second average might be more trusted because there is more consensus around a particular rating (a lower deviation).
(*In practice, some albums can have several thousand ratings)
This album has a Bayesian average rating of 70.2/100, a mean average of 69.4/100, and a trimmed mean (excluding outliers) of 70.1/100. The standard deviation for this album is 20.1.

Quite easily the best album of 1981 and second best Journey album. They were so full of confidence here and the songs just explode with energy. Steve Perry is one of the best ever rock singers and he is absolutely on fire here. The last two songs will give you goosebumps since Steve's singing is out of this world.
Oh and the opener is one of the greatest songs of the 80's.

great vocals and guitar, f*&^ these haters. they just think they're cool to hate on w/e is/was the billboard #1 album. oh and I remember liking the atari game, and I first played it in the mid-90's, so f*&^ that guy too!

Irritating but addictive. You could not escape this album in 1981. I gave it ten extra points for spawning a rather crappy Atari 2600 game of the same name.

For critical reasons, I can only give this album a 70, and even that's being generous, but you don't have to be an ironic, hipster-type to let go of your critical prejudices and just enjoy what Journey did here. Keyboardist Gregg Rollie left and was replaced by Jonathan Cain, and the songs show a marked change in direction. It was Cain who brought "Open Arms" with him and would later write "Faithfully". Any pretensions of being strictly hard rockers were dropped. But so what? When you've got a vocalist like Steve Perry, you need to play to your strengths and for the next three albums they would do just that. Check out Perry's performance of "Mother Father" live from this tour (Houston), then tell me Journey wasn't clicking on all cylinders at this point.

This is squeeze. Boring! The song "Open Arms" really gets on my nerves.

South Detroit would be Windsor, Ontario. Just pointing that out.

"open arms" was my senior prom theme, and although i'm not particularly fond of the song, the album definitely takes me back to that era.

most songs on this aor-record are what aor was invented for: positive-cheerful-slick or gentle-romantic. all is suitable for the masses. many music-lovers will find this repellent. if you are more laid-back in this respect you maybe will find some agreeable tunes on it.

Your feedback for Escape