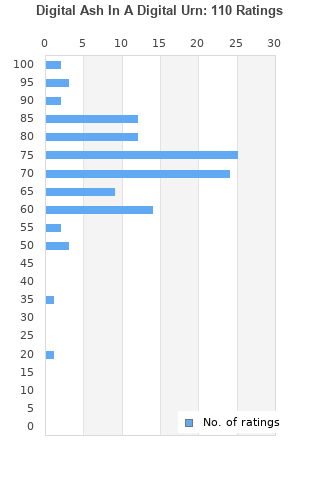 Bright Eyes - Digital Ash In A Digital Urn [New Cassette]
Condition: Brand New
Time left: 22h 59m 30s
Ships to: Worldwide
$12.58
Go to store
Product prices and availability are accurate as of the date indicated and are subject to change. Any price and availability information displayed on the linked website at the time of purchase will apply to the purchase of this product.  See full search results on eBay

Digital Ash In A Digital Urn is ranked 4th best out of 15 albums by Bright Eyes on BestEverAlbums.com.

The best album by Bright Eyes is I'm Wide Awake, It's Morning which is ranked number 396 in the list of all-time albums with a total rank score of 4,990.

Listen to Digital Ash In A Digital Urn on YouTube 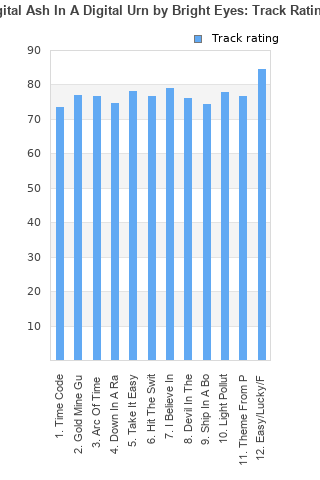 Rating metrics: Outliers can be removed when calculating a mean average to dampen the effects of ratings outside the normal distribution. This figure is provided as the trimmed mean. A high standard deviation can be legitimate, but can sometimes indicate 'gaming' is occurring. Consider a simplified example* of an item receiving ratings of 100, 50, & 0. The mean average rating would be 50. However, ratings of 55, 50 & 45 could also result in the same average. The second average might be more trusted because there is more consensus around a particular rating (a lower deviation).
(*In practice, some albums can have several thousand ratings)
This album has a Bayesian average rating of 73.7/100, a mean average of 72.8/100, and a trimmed mean (excluding outliers) of 73.8/100. The standard deviation for this album is 11.8.

This is the "electronic" side of "I'm Wide Awake it's Morning". Great production, double drums and good songs.
But fans preferred the acoustic one.

I like this side to Bright Eyes, but yet again he sounds way too angsty and maybe needs to stop worrying so much and get stoned.

Bright Eyes's "digital ash in a digital urn" is Conor's take on electronica. There seemed to be a bunch of these indie-songwriter-meets-IDM after the success of the postal service. Conor's lyrical style doesn't mesh 100% with the musical style, which keeps this from flowing as well as his other 2005 album (or "Lifted", for that matter). Best songs = "take it easy (love nothing)" (a tale of exploration, as in "First with your hands, then with your mouth / A downpour of sweat, damp cotton clouds / I was a fool, you were my friend / We made it happen") and "easy / lucky / free" (great closer). When he hits the mark, it's because his lyrics don't overweigh the FX and the FX don't overwhelm the song, like on the two best songs or "light pollution", which sounds like a typical bright eyes song just given some not-so-usual backing "instrumentation". "easy / lucky / free" is the perfect marriage of the IDM with Conor's narrative over how the end of life is the easiest (luckiest and freest) part of living, singing "Sometimes I worry that I've lost the plot / My twitching muscles tease my flippant thoughts / I never really dreamed of heaven much / Until we put him in the ground / But it's all I'm doing now" and showing how actual living is chaotic enough "I set my watch to the atomic clock / I hear the crowd count down til the bomb gets dropped / I always figured there'd be time enough / I never let it get me down" with backing FX of people's hysterical screaming. "There is nothing as lucky, as easy, or free". One of his best songs. When Conor doesn't hit it, you have a cluttered "time code" (with the usual annoying intro) or the jumbled message and unnecessary outro of "i believe in symmetry" (which sounds more like it's backed by a NIN-light band than an IDM guy) or the crying baby segments of "ship in a bottle". But for the most part, this album is closer to "hit" than "miss", but not as consistently-good as anything from "fevers and mirrors" to "i'm wide awake, it's morning".

Your feedback for Digital Ash In A Digital Urn