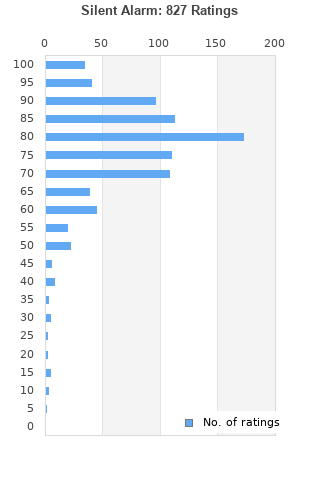 Bloc Party Silent Alarm picture disc LP vinyl album record UK WEBB075PD
Condition: Used
Time left: 8h 12m
Ships to: Worldwide
£132.70
Go to store
Product prices and availability are accurate as of the date indicated and are subject to change. Any price and availability information displayed on the linked website at the time of purchase will apply to the purchase of this product.  See full search results on eBay

Silent Alarm is ranked as the best album by Bloc Party. 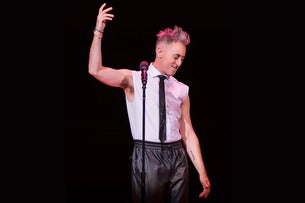 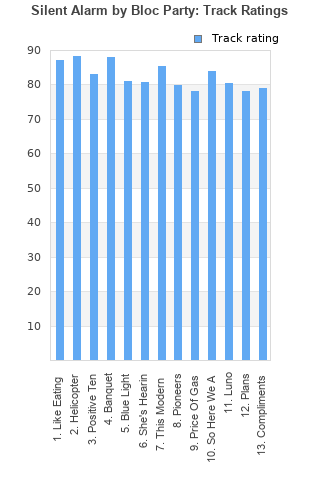 Rating metrics: Outliers can be removed when calculating a mean average to dampen the effects of ratings outside the normal distribution. This figure is provided as the trimmed mean. A high standard deviation can be legitimate, but can sometimes indicate 'gaming' is occurring. Consider a simplified example* of an item receiving ratings of 100, 50, & 0. The mean average rating would be 50. However, ratings of 55, 50 & 45 could also result in the same average. The second average might be more trusted because there is more consensus around a particular rating (a lower deviation).
(*In practice, some albums can have several thousand ratings)
This album is rated in the top 4% of all albums on BestEverAlbums.com. This album has a Bayesian average rating of 77.5/100, a mean average of 76.3/100, and a trimmed mean (excluding outliers) of 77.5/100. The standard deviation for this album is 14.9.

Fantastic drumming here. Some great songs, passed me by at the time. It was only downhill from this debut.

I'm listening it right now while writing this comment and I am so amazed. I've listened to it a lot of times and now I'm sure that is one of the best albums of the 2000's. No padding at all and one of the best drummer I've ever listened.

Pretty standard indie-rock album. Some tracks are quite nice, but overall it seems pretty generic to me. Good, but not excellent 70/100

So much love for this album, not quite like anything I have ever heard before, so much fun from front to back with minimal filler, and so many great great GREAT tracks... too bad they went downhill.

Slick and beefy with room left over for that distinctive, ever-so-slightly rough guitar sound that really defines the album. It kicks off brilliantly before hitting weaker areas later on, but maintains its overall strength to the end.

Perhaps it is a little samey with its sound, but at the rear same time, the sound is thoroughly fleshed out and really shows its worth on "Banquet" and "So Here We Are".

Also noteworthy is the feel of the album: melancholy, yet on the aggressive side, and tinged with urban tones. You really can hear the band's home city of London on this record.

Overall, this is an enjoyable and well developed album, that is perhaps best enjoyed every once in a while. Weak in some spots, but defined by its best moments.

Your feedback for Silent Alarm