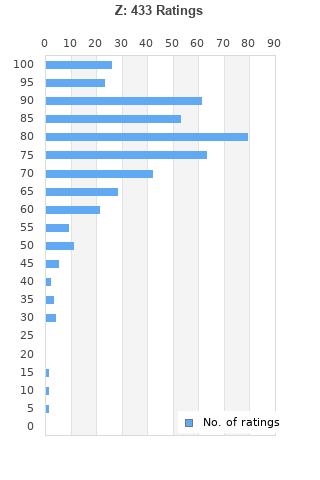 Z is ranked as the best album by My Morning Jacket. 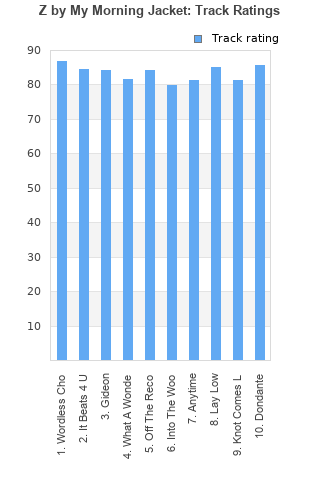 Rating metrics: Outliers can be removed when calculating a mean average to dampen the effects of ratings outside the normal distribution. This figure is provided as the trimmed mean. A high standard deviation can be legitimate, but can sometimes indicate 'gaming' is occurring. Consider a simplified example* of an item receiving ratings of 100, 50, & 0. The mean average rating would be 50. However, ratings of 55, 50 & 45 could also result in the same average. The second average might be more trusted because there is more consensus around a particular rating (a lower deviation).
(*In practice, some albums can have several thousand ratings)
This album is rated in the top 3% of all albums on BestEverAlbums.com. This album has a Bayesian average rating of 78.2/100, a mean average of 77.3/100, and a trimmed mean (excluding outliers) of 78.3/100. The standard deviation for this album is 14.9.

This is an album that goes very under appreciated in terms of the quality that is on display. There are a lot of incredible songs on here, that have a lot of depth and some great instrumentation. They also provide their own spin on the music and so it makes for a very unique listen. I love the lyrics and vocal as well which both just add to the quality of the whole record. It really does get better with every listen and you keep finding new things to love when you revisit this release. However, there are a few issues and one is the lack of diversity in terms of song style which makes you want something new by the end of the record. Also, I do think the second half is a little weaker than the first. Overall, this album is very enjoyable and one that doesn't get the credit it deserves.

I think I need help getting this album. It hasn't clicked for me.

I liked MMJ from the first time i heard it by American Dad it was great.

At least on first listen, an album that seemed to get better and better as it went on. I really liked the back half of it.

I didn’t quite “get” this album when I first heard it in college. I get it now. It’s a masterpiece and one of the best albums of the 2000s. Reminds me of a whiskey-soaked Radiohead.

To be honest, it gets worse with every listen you take, but it still carries a variety of arena rock and psych rock with it, that makes for a pretty good album.

My Morning Jacket is about as close as one gets to a true twenty-first century arena rock band that I actually like. Of course, that's because these Louisville, Kentucky, natives are so much more than mere Skynyrd or Van Halen knockoffs. Even though their live performances include the light shows, smoke machines, and flying hair reminiscent of a seventies Live-at-Budokan cliché, Jim James and company actually seem to have something to say. "Off the Record," for instance, is a clever play on words that refers both to the duplicitous nature of politics and to the choices artists must make when deciding what material to make public. Z is just a great throwback rock and roll album.

The music is very good, imo, but wasn't crazy about the vocals. If the vocals were connecting with me, this'd probably make my top 100 of the 2000s.

Your feedback for Z