Picaresque (studio album) by The Decemberists 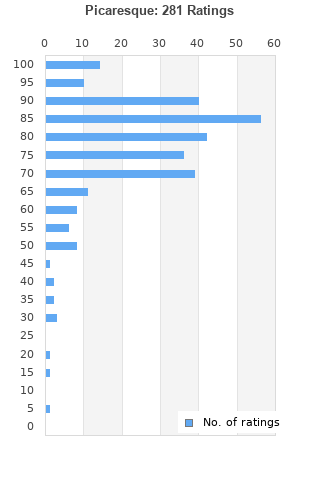 Picaresque is ranked 2nd best out of 16 albums by The Decemberists on BestEverAlbums.com.

The best album by The Decemberists is The Crane Wife which is ranked number 697 in the list of all-time albums with a total rank score of 2,669. 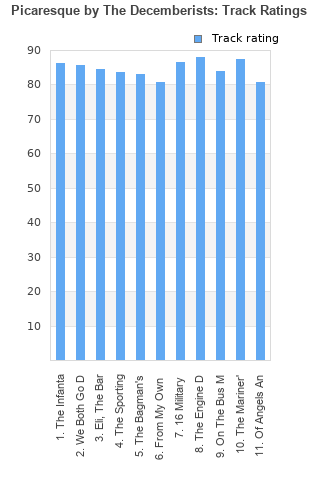 Rating metrics: Outliers can be removed when calculating a mean average to dampen the effects of ratings outside the normal distribution. This figure is provided as the trimmed mean. A high standard deviation can be legitimate, but can sometimes indicate 'gaming' is occurring. Consider a simplified example* of an item receiving ratings of 100, 50, & 0. The mean average rating would be 50. However, ratings of 55, 50 & 45 could also result in the same average. The second average might be more trusted because there is more consensus around a particular rating (a lower deviation).
(*In practice, some albums can have several thousand ratings)
This album is rated in the top 3% of all albums on BestEverAlbums.com. This album has a Bayesian average rating of 78.4/100, a mean average of 77.3/100, and a trimmed mean (excluding outliers) of 78.6/100. The standard deviation for this album is 15.1.

This album is a stunning blend of lyrical genius and amazing musical performances. The stories that are woven out on every single song is brilliant and gives the listener so much to be able to explore and look into. The storytelling is amazing and keeps me coming back for more. As well as this, there is the music itself which is amazing and fits the lyrics perfectly. I never feel disconnected from the album for the whole run time and there is a lot of layers to explore in the instrumentation as well. While the music may not be as experimental as The Crane Wife, I do believe it is more consistent and there is no weak cuts on this record. Also, I love the vocal performance and think it is extremely unique and delivers the lyrics excellently. Overall, I think this is the artists best work but The Crane Wife is a very close second and both are a must listen for people who love music.

Engine Driver, On the Bus Mall, and The Mariner's Revenge Song might just be my three favorite Decemberists songs, so to have them strung together here is pretty special. I am also a big fan of Of Angels and Angles, so the ending to this album is just sublime for me.

This is the strongest Decemberists album lyrically, with some beautifully evocative storytelling as others have noted. The Crane Wife may be a bit more interesting musically.

If I had to find fault, the tone and lyrical content of The Sporting Life and 16 Military Wives don't quite fit the rest of the album in my opinion. Not bad songs, but to me they feel out of place here for some reason.

Missoula, Montana, native and main Decemberists songwriter Colin Meloy is one of the great musical storytellers of our time, and over time I've come to embrace his faux-Brit singing style as an enhancement of his gifts rather than an affectation. The devastating and literally haunting "Eli, the Barrow Boy" is emblematic of what makes this album especially great, as it displays a richness and depth of storytelling not quite fully realized in the Decemberists' earlier work. The band's popularity these days, particularly here in Meloy's home state of Montana, means that I'll likely never see them in a small venue, which is a shame because the complexity and nuance of these performances really demands a venue as intimate as the songs.

Almost every song is a great short story. Those that arent, are novels. What a great novel would The Mariner's Revenge Song maek? Or On the Bus Mall? Eli? Bagman's Gambit? It's just an incredible album and unlike others here, I find it to be theer best album.

Favorite Tracks: The Mariner's Revenge Song, We Both Go Down Together & 16 Military Wives

Picaresque is the great leap for The Decemberists. They establish themselves as a unique and indispensible voice in music.

This is another greatrecord from this band. Very close to which isbetter overall this or The Crane's Wife. Excellnet album! MEZ

This album, specifically the song "Engine Driver," is what got me into this band. It has several great tracks and was their most consistent album to date. I do prefer The Crane Wife and the Hazards of Love, but I think this is the strongest of their "classic" style.

Your feedback for Picaresque