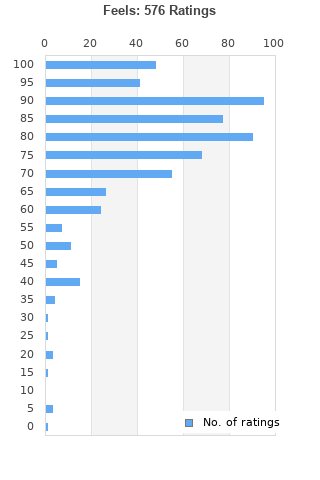 Feels is ranked 3rd best out of 28 albums by Animal Collective on BestEverAlbums.com.

The best album by Animal Collective is Merriweather Post Pavilion which is ranked number 125 in the list of all-time albums with a total rank score of 13,466.

Animal Collective with special guest the Spirit of the Beehive
Humphreys Concerts By the Bay, San Diego, United States. 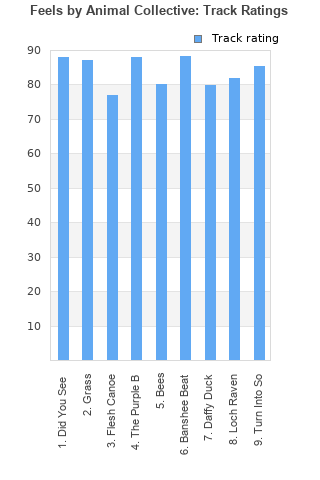 Rating metrics: Outliers can be removed when calculating a mean average to dampen the effects of ratings outside the normal distribution. This figure is provided as the trimmed mean. A high standard deviation can be legitimate, but can sometimes indicate 'gaming' is occurring. Consider a simplified example* of an item receiving ratings of 100, 50, & 0. The mean average rating would be 50. However, ratings of 55, 50 & 45 could also result in the same average. The second average might be more trusted because there is more consensus around a particular rating (a lower deviation).
(*In practice, some albums can have several thousand ratings)
This album is rated in the top 2% of all albums on BestEverAlbums.com. This album has a Bayesian average rating of 79.3/100, a mean average of 78.3/100, and a trimmed mean (excluding outliers) of 79.4/100. The standard deviation for this album is 16.7.

This is definitely Animal Collectives most emotional album as they really slow down their songs and allow the instruments to truly dominate the music. This creates a rich soundscape for the listeners to enjoy and to explore. Also, they have these up tempo tracks that are more like the Animal Collective we know, with the wild beats and brilliant vocal. It creates a fantastic blend of songs that really work well together. However, I do think some tracks are too slow and I am really not a fan of the track Daffy Duck. That being said I love this album and it is among the groups best ever.

This is easily the best Animal Collective album. The concept of doing a whole album tuned to an out of tune piano is pretentious, but at the same time there is nothing quite like this. In other words, they pulled it off. It's raw, fun and trippy af!

In short, this is my favorite Animal Collective album and one that I think is the easiest to relate to given the more raw emotion. The lush, though soft, instrumentation adds to Avey Tare's commonly quiet vocals and the whole album feels as though someone is whispering to their diary, unveiling their deepest feelings in secrecy.

Favorite Tracks: Did You See The Words?, Grass, The Purple Bottle, Banshee Beat, Daffy Duck, Turn Into Something

Don't enjoy the folk part of it, don't enjoy the "experimenal" part of it, and I don't know how anybody could. Maybe the folk of the same culture, as is usual with folk. But I doubt whether they'd like the experimental parts. And lest you say "that's just your opinion", influence it didn't exert either (where's the cacophonous screeching in modern music today, other than two split seconds on Frank Ocean's Blonde?), and rightly so. That's not to say experimental folk hasn't strangely been a bit of a thing in the 00s, it's just never been able to become something everyday people listen to and no artist has drawn influence from it, which makes it impossible to call it culturally relevant. It's not that I would deny it as an original style, one that is occasionally enjoyable when they don't try so hard to be experimental. My criticism is just, who would listen to this other than a fucking echo chamber of American hipsters no one dares to disagree with because hell hath no fury as a hipster scorned (and most people just go on and muzzle themselves by assuming they just "don't get it").

Sometimes I hear them going in a right direction, I genuinely think these guys have real talent, but then I hear them trying too hard, again and again going into a joyless intermezzo/unnecessary dragged out, equally joyless outro/you name it, and I think to myself: "you had a good thing going on, what are you doing now?!"

And the theatrical part of it I fucking HATE. Take that musical-ass bullshit home and shove it up your ass.

Underrated as hell, an expansion on the freak folk of Sung Tongs combined with piano and an increasing penchant for melodies

Favorites: Did You See The Words, The Purple Bottle, Banshee Beat, Turn Into Something.

I really struggled with this one , the unstructured nature of the songs along with the repetitive rhythms takes some getting used to

Really the only Animal Collective album I listen to over and over again. Every song is almost perfect and I never want to skip any of them. Truly great stuff here. Helps that I saw them two nights in a row back in the day. Probably my favorite album of 2005!

A near perfect album to me. Exploding with emotion that mimics an isolated screech into the void. A great premonition of what AnCo would do in the years to follow. Constantly juxtaposing arrangements akin to childlike exploration with cacophonous screeching, there are truly few albums as unique as this one, which is not unexpected for the group in question.

One of the best albums of 2005 and by extension, the decade.

Your feedback for Feels