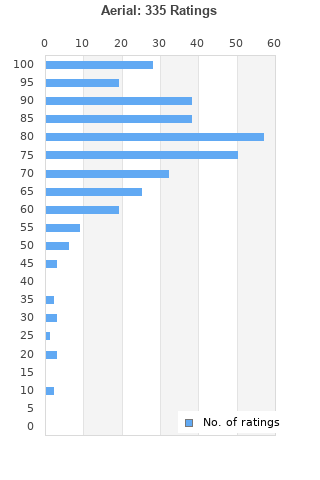 Bush, Kate : BUSH KATE-AERIAL CD Value Guaranteed from eBay’s biggest seller!
Condition: Very Good
Time left: 10h 50m 30s
Ships to: Worldwide
£3.94
Go to store
Product prices and availability are accurate as of the date indicated and are subject to change. Any price and availability information displayed on the linked website at the time of purchase will apply to the purchase of this product.  See full search results on eBay

Aerial is ranked 4th best out of 16 albums by Kate Bush on BestEverAlbums.com.

The best album by Kate Bush is Hounds Of Love which is ranked number 74 in the list of all-time albums with a total rank score of 20,216. 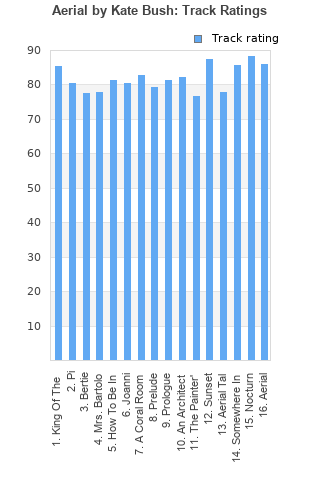 Rating metrics: Outliers can be removed when calculating a mean average to dampen the effects of ratings outside the normal distribution. This figure is provided as the trimmed mean. A high standard deviation can be legitimate, but can sometimes indicate 'gaming' is occurring. Consider a simplified example* of an item receiving ratings of 100, 50, & 0. The mean average rating would be 50. However, ratings of 55, 50 & 45 could also result in the same average. The second average might be more trusted because there is more consensus around a particular rating (a lower deviation).
(*In practice, some albums can have several thousand ratings)
This album is rated in the top 4% of all albums on BestEverAlbums.com. This album has a Bayesian average rating of 77.7/100, a mean average of 76.8/100, and a trimmed mean (excluding outliers) of 77.9/100. The standard deviation for this album is 15.9.

Great opening track, but the last half of this album is absolutely sublime.

It's Kate Bush. So of course it's great. The one thing I noticed when I was listening though, is that there's a lot less electronic based instrumentation considering it was 2005. But other than that, it sounds great, and it all flows great, much like Hounds of Love.

In both flight and song, birds seem to possess other-worldly powers. We are unable to crack the code and stand forever outside their world in awe. And it is this sense of being overwhelmed that holds the tracks of this album together.
It is easily the most accessible album by Kate Bush if a listener is open to the words and sounds of a contemplative narrator. The stories she tells in "King of the Mountain" or "Lovely Bertie" are full of concrete imagery which is the tone of the first half of "Aerial." On the second half, her lyrics turn more figurative and abstract -- reinforcing the sense of wonder and affection from the tracks on part one, and creating a mood for enthusiastic exploration of a feeling I would describe as embracing the immensity of existence.
I'm happy to have it top my list of favorite albums I've ever owned.

best voice in the world.it just moves along so smoothly.and if you have the pleasure of a English summer day.sky of honey capturesit wonderfully.

Aerial is a bit too large and has dated production at times, but features some of the most sincere moment's in Kate Bush's career and a gorgeous ending.

Sunset, Nocturn and Aerial is definetly amongst her best performances. Brilliant!

The are songs enough here to count it as a classic in my record collection. Strangely enough a lot of boring stuff starting the album off. At the end it's exploading in beauty. Love it

I do not think that this album is overlong at all. I think that it takes a lot of brain and time and understanding before you really are rewarded and "get it". But this shouldn't be such a new thing for Bush fans. This album is very similar in it's composition to Hounds of Love. It just doesn't have those bombastic singles to accompany the first half, which is the weakest part to Aerial, imo. The second half, however, is also like The Ninth Wave. A concept suite of songs that flow together well and tell a story (in this case a day in the character's life and what she experiences). But I would stress to say that A Sky of Honey is better than The Ninth Wave. I would give this album a higher score, perhaps a 100 like Hounds of Love, but the first half is too forgettable to me. I'd rather just play 42 mins of A Sky of Honey and call it the album. Maybe KOTM with it.

I do agree with practically everyone else that it is overlong and therefore a bit overwhelming to tackle head-on, however I have to say that this is one of the legendary Kate Bush's finest works.

Side 1 manages to turn the ordinary into something extraordinary, such as the tracks "Mrs. Bartolozzi" & "Pi", whereas Side 2 ("A Sky Full of Honey") is simply lovely. All of it flows by so well, like ambient music, and reminds me of a sunrise over lush British moors.

It is a Kate Bush album which is reason alone to give it a listen, but I mean all of the album radiates such warmth and beauty; it's definitely something I'd recommend. Welcome back Kate Bush.

A bloated but fascinating album from Kate Bush. Yes, a single album version probably would have tightened up the record a bit, but you can't argue with the quality of most of it. Bush is still as enigmatic and inventive as ever and although it's far from her best work it's still an intriguing listen.

Your feedback for Aerial