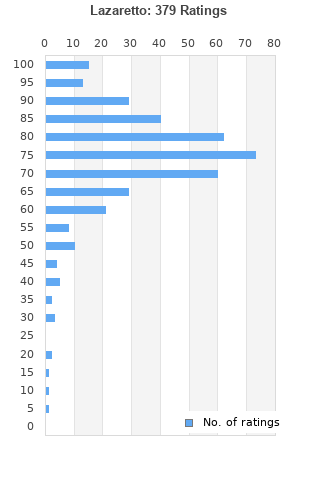 Lazaretto is ranked 2nd best out of 5 albums by Jack White on BestEverAlbums.com.

The best album by Jack White is Blunderbuss which is ranked number 748 in the list of all-time albums with a total rank score of 2,500. 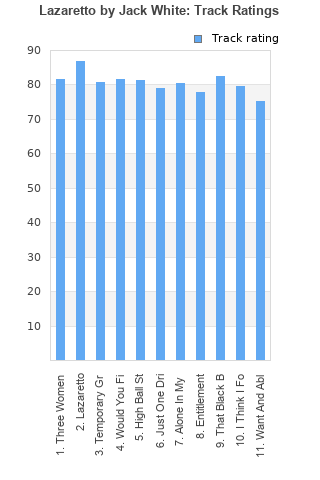 Outliers can be removed when calculating a mean average to dampen the effects of ratings outside the normal distribution. This figure is provided as the trimmed mean. A high standard deviation can be legitimate, but can sometimes indicate 'gaming' is occurring. Consider a simplified example* of an item receiving ratings of 100, 50, & 0. The mean average rating would be 50. However, ratings of 55, 50 & 45 could also result in the same average. The second average might be more trusted because there is more consensus around a particular rating (a lower deviation).
(*In practice, some albums can have several thousand ratings)
This album is rated in the top 18% of albums on BestEverAlbums.com. This album has a mean average rating of 74.0/100. The trimmed mean (excluding outliers) is 74.9/100. The standard deviation for this album is 15.1.

Jack White has made a significant mark on the history of rock and roll music, both as the creative force behind the White Stripes and as a record producer and collaborator. His contributions as a solo artist have been more modest, probably because they lack some of the ragged, idiosyncratic edges that made his work with his sister Meg so special. Having said that, I do think Lazaretto deserves consideration for its a statement about Jack White's virtuosity on the guitar, which is absolutely undeniable on this album. While it feels more polished, more produced, and ultimately more calculated than anything the White Stripes ever did, it's an enjoyable listen that contains the very fine track "Alone in My Home."

He tries so hard to bring rock back, it’s a bit embarrassing. The solos are uninteresting and the riffs are beyond outdated. What is interesting is the way he uses and combines instruments, but without this large arrangement of instruments he would’ve sound very bland, if he doesn’t already.
Oh and of course, a song named after the go-to argument of delusional, spoiled and - above all - entitled white boys to explain away hard statistics with “we all have it difficult”: “Entitlement”. It’s not a coincidence it’s only this specific group (and a couple of edgy, self-hating black people and women) who notice this ‘issue’ in the world; they’re the only ones that have actually been entitled in a part of their lives, and then unjustly notice the same pattern in people who actually have faced problems, because they can’t notice something called ‘nuance’. And so every complaint starts to look like entitlement, because in their life that’s actually a fact.
Besides that, boring album with a couple of good moments. If you’re into hard rock and folk, this album should be in your list.

While kind of bland in rare occasions, I like the unique sounds he's adding to his repertoire. Sure this might be a bit safe sounding, but the dude's not 20 anymore. He totally lives in safeville now, what would you expect?

Overall I like the more mature songwriting of Jack White. The lyrics of Entitlement are so needed for this day and age. Wipe your own ass kids!

Never ever give up on Jack White. I'm just realising now what a damn fine album this is. Along with that blistering title track, Fight for My Love and Culprit are just two more tracks here that stand with his best ever.

Even a sub-par Jack White record is still wonderful, and these songs are great live.

I think this album is really strange and creative. Sincerely I prefer the previous, and overall, I prefer White Stripes

My favorite songs are Would You Fight for My Love? and That Black Bat Licorice. I think the rest is not bad but predictible.

Your feedback for Lazaretto