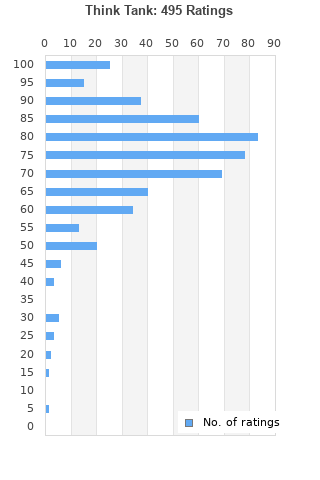 Think Tank is ranked 5th best out of 21 albums by Blur on BestEverAlbums.com.

The best album by Blur is Parklife which is ranked number 211 in the list of all-time albums with a total rank score of 8,532. 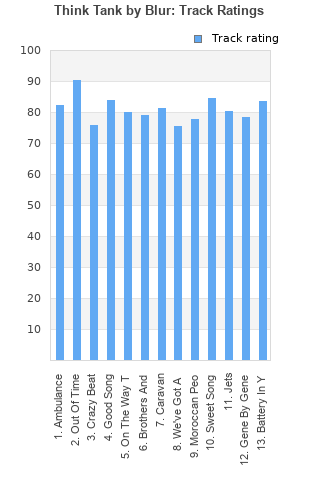 Rating metrics: Outliers can be removed when calculating a mean average to dampen the effects of ratings outside the normal distribution. This figure is provided as the trimmed mean. A high standard deviation can be legitimate, but can sometimes indicate 'gaming' is occurring. Consider a simplified example* of an item receiving ratings of 100, 50, & 0. The mean average rating would be 50. However, ratings of 55, 50 & 45 could also result in the same average. The second average might be more trusted because there is more consensus around a particular rating (a lower deviation).
(*In practice, some albums can have several thousand ratings)
This album is rated in the top 16% of all albums on BestEverAlbums.com. This album has a Bayesian average rating of 74.9/100, a mean average of 74.2/100, and a trimmed mean (excluding outliers) of 75.0/100. The standard deviation for this album is 14.9.

My favourite Blur album, but really it's just 4 exceptional tracks and the rest is lacking. Battery In Your Leg, Good Song, Sweet Song and Out Of Time are so good - if the other songs were even anywhere near as good as those, this would be an all-time greatest album for sure. Crazy Beat is an abomination, don't know how this ended up on the same album as the aforementioned fab 4.

They didn't feel like recording this album, and frankly that's in some way reflected in the songs.
Despite that, it has some nice tunes such as the great Out of time, the interesting-sounding On the way to the club and Brothers & Sisters (this would fit in Gorillaz debut), and the low-key ballads Caravan and Sweet song. Surely worth a listen.

Even tho this album doesnt have as strong and significant singles as previous albums it is the most consistent and in my opinion the best Blur album, I would rate it 100/100 if it had at least one "hit song"

Not their best album, not their worst. Still enjoyable, 7/10.

Their best album. Beautiful, melancholic. The perfect mix between electronic sounds and those middle east instruments.

Favoritas: Out Of Time, Good Song, Sweet Song, We've Got a File On You

The first Blur album without Graham Coxon(although he appears on a couple of tracks), think tank, is totally dominated by Damon Albarn. It almost feels like an Albarn solo album. Still, there is some good stuff here, most notably the lovely, out of time, and, ambulance. It's not all great, crazy beat, is an attempt at a Gorrilaz version of, song 2, it's a bit slight. All in all, a good record, but due to Coxon's departure there's not enough guitar. Probably Blur's least essential album.

A continuation of the experimental side of Blur. Interesting how they made this record around places like Morocco and Devon. Very weird sounding and interesting to listen. May want to hear the record a few more times.

With no guitarist and no ideas, one of the weakest Blur's album. Except for the malynconic single "Out of Time".
After this album they split up.

I really want to like this because I don't want to admit I prefer the poppier, fun Blur to the more experimental, risk-taking Blur. But this just falls super flat. It's got weird trip-hoppy beats going on that would be better explored in Gorillaz. And honestly it's just boring. It's not all that unique, it's just different than their other albums.

Your feedback for Think Tank