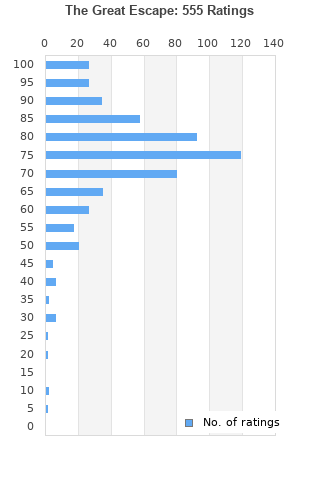 The Great Escape is ranked 7th best out of 21 albums by Blur on BestEverAlbums.com.

The best album by Blur is Parklife which is ranked number 211 in the list of all-time albums with a total rank score of 8,635. 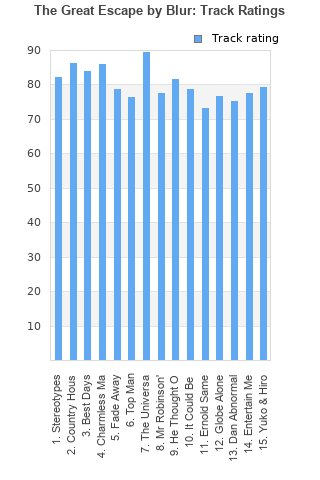 Rating metrics: Outliers can be removed when calculating a mean average to dampen the effects of ratings outside the normal distribution. This figure is provided as the trimmed mean. A high standard deviation can be legitimate, but can sometimes indicate 'gaming' is occurring. Consider a simplified example* of an item receiving ratings of 100, 50, & 0. The mean average rating would be 50. However, ratings of 55, 50 & 45 could also result in the same average. The second average might be more trusted because there is more consensus around a particular rating (a lower deviation).
(*In practice, some albums can have several thousand ratings)
This album is rated in the top 10% of all albums on BestEverAlbums.com. This album has a Bayesian average rating of 75.5/100, a mean average of 74.6/100, and a trimmed mean (excluding outliers) of 75.6/100. The standard deviation for this album is 14.5.

A very hit and miss album although the hits on here are terrific, alot of quirky no. s.

Severely underestimated album. It's clearly quite spotty; but have great singles (among the best of their career), and some bittersweet gems such as Best days, Fade away, He thought of cars or It could be you.
It also saw hints of what was to come both in Blur and Damon's side projects future albums. Definitely doesn't have the credit it deserves.

This just feels like a stripped down, basic version of Parklife, without the charm or the quirkiness of Parklife. Disappointing.

It starts in the best of ways, but it goes down and does not remount. 6/10.

I thought it was a sound unlike any I've heard before, and see Gorillaz influences.

A bit up and down and not one of my favourites but still a good album. Would probably have been better cut down to 10 or 11 tracks, but still not up to Parklife.

The follow up and a kind of companion album to, Parklife, is another cracking LP. It hasn't quite got the bite and edge of it's predecessor, but there are some fine songs and many more quirky characters to meet. Best days, is absolutely beautiful, as is, yuko and hiro, and off course, the universal, is one of Blur's greatest ever songs. A bit of filler here and there but the album is a lot better than some people claim. Having said that, it's clear Blur needed to change something after this record. And they did, brilliantly so.

Great first half, forgettable second half. There are some really good songs but there are some meh songs. No wonder why Damon said this album is very messy. At least this record signaled Blur to change things up and move away from Britpop.

I like this album. there some gems, but not everything is strong, there some weak tracks... still I like it better than some other of their albums that rated higher than this one.

Your feedback for The Great Escape