Surf's Up (studio album) by The Beach Boys 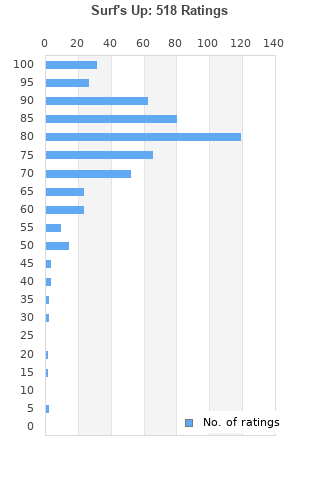 Surf's Up is ranked 3rd best out of 66 albums by The Beach Boys on BestEverAlbums.com.

The best album by The Beach Boys is Pet Sounds which is ranked number 12 in the list of all-time albums with a total rank score of 52,140. 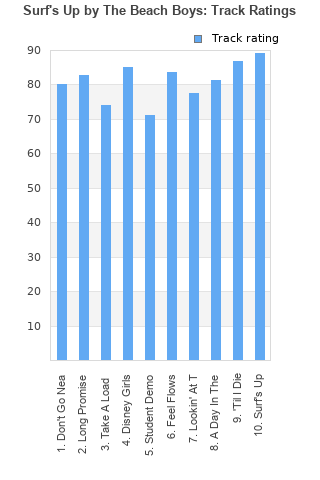 Rating metrics: Outliers can be removed when calculating a mean average to dampen the effects of ratings outside the normal distribution. This figure is provided as the trimmed mean. A high standard deviation can be legitimate, but can sometimes indicate 'gaming' is occurring. Consider a simplified example* of an item receiving ratings of 100, 50, & 0. The mean average rating would be 50. However, ratings of 55, 50 & 45 could also result in the same average. The second average might be more trusted because there is more consensus around a particular rating (a lower deviation).
(*In practice, some albums can have several thousand ratings)
This album is rated in the top 2% of all albums on BestEverAlbums.com. This album has a Bayesian average rating of 78.9/100, a mean average of 78.2/100, and a trimmed mean (excluding outliers) of 79.0/100. The standard deviation for this album is 13.7.

This album actually grew on me, I think its gentle and not as impressive as Pet Sounds, but it is beautiful in its own way, sounds a bit like Disney songs.

the voices and production are awesome, sadly i thin beach boys after pet ounds never achieve that quality again

quite a fascinating array of music almost indescribable but immensely entertaining

This is an interesting album, but I feel it's a bit overrated. Some moments are fantastic, others feel a bit sloppy/underachieving. Worth a listen for sure, but not the refined masterpiece others are making it out to be.

One of the most beautiful album of the 70's. Criminally underrated.

The best written and executed album from The Beach Boys, aside from Pet Sounds and Smile.

Excellent psychedelic album by The Beach Boys where the approach feels more mature and deeper. Many good tracks including the opener and title track.

This is a lush and easy going album for the most part, but not in the usual beach boys easygoing manner. You can definitely sense the maturity from the rest of the members after the pet sounds/smile experiences, and it’s still experiemental, while being memorable. Feel Flows is one of the best Beach Boys songs ever. The only song that’s average is Take a Load Off Your Feet.

A much better album than Sunflower (which I find totally flat). There are some interesting tracks on this one especially Feel Flows.

The first few songs have a perfect contrast between the vocals and the background music, the first being happy and the latter being sad, which creates a beautiful mellow feeling. “Long Promised Road” is a masterpiece. “Disney Girls” is a real tearjerker. After you’ve skipped “Student Demonstration Time”, there is a rather spiritual part in the album, which slowly transcends into depressing when you arrive at “Til I Die”. And then “Surf’s Up”, which is of course an amazing song.

Your feedback for Surf's Up