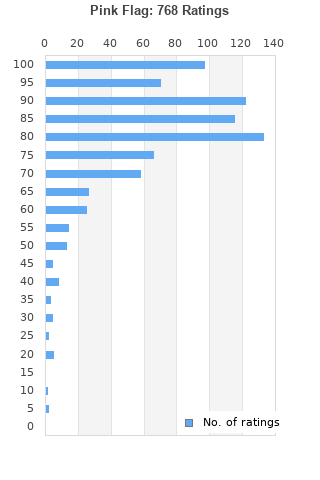 Pink Flag is ranked as the best album by Wire. 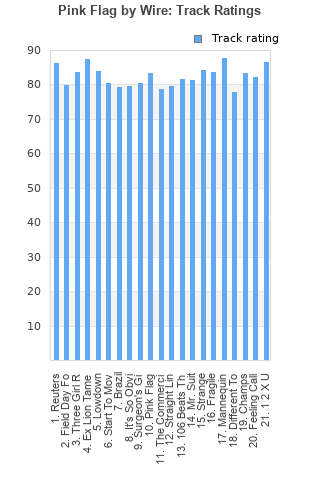 Rating metrics: Outliers can be removed when calculating a mean average to dampen the effects of ratings outside the normal distribution. This figure is provided as the trimmed mean. A high standard deviation can be legitimate, but can sometimes indicate 'gaming' is occurring. Consider a simplified example* of an item receiving ratings of 100, 50, & 0. The mean average rating would be 50. However, ratings of 55, 50 & 45 could also result in the same average. The second average might be more trusted because there is more consensus around a particular rating (a lower deviation).
(*In practice, some albums can have several thousand ratings)
This album is rated in the top 1% of all albums on BestEverAlbums.com. This album has a Bayesian average rating of 82.2/100, a mean average of 81.1/100, and a trimmed mean (excluding outliers) of 82.3/100. The standard deviation for this album is 15.7.

This album is heavy influenced by proto-punk (The Stooges, Velvet Underground) and combines it with the energy of Ramones. The effect is not very consistent album, where a lot of songs have a minute runtime so they just pass you by but there is a lot of intriguing and great tracks like Reuters, Pink Flag, Strange, Champs, Mannequin, 12 X U. They sound like they influenced bands like Joy Divison, Pixies and other alternative 80s bands.

I do not get this album at all, so say it is a classic, yeah to some but not to me.
Some funny tunes and hilarious lyrics, ok that's crazy

There are many classics I can't say I'm really a fan of, but this was so disappointing. I mean, 21 tracks in 35 minutes, what's this? Do they try to make fun of the Ramones or are they serious? If they were (serious), they weren't convincing at all. Most of the tracks just pass you by without leaving any lasting impression. I wonder if I'll be able to recognise a single song in case of a -rather unlikely to be honest - second listen. Also, it seems to be labelled as both punk and post-punk, but it sounds much more like the former than the latter, which is a vague term anyway, but you get the point - this not a complaint or a criticism, just an observation. There is some variety that most punk records miss, but the vocals for example are just too punk(a bit whiny, a bit annoying, you know) . Stand out moments? There were some cool riffs for sure, if I had to pick one track, I'd go with Champs. I'm sure there's something I'm missing here, if anyone who is into it - and I guess there's many of you- would like to point out any of the qualities of this album, please do. There are many albums which don't make much sense out of context, so maybe one should be there as it happened to "get" it.

Very nice to hear this unique piece of art.

I just found out I'm not so into punk like I thought. Most of the songs sounded the same but I did like the pace of it, some songs are better than others but there isn't an outstanding one or so. I liked it, I bumped my head and stuff but it kinda felt like a 30 minute song tbh.

Pink Flag contains 21 songs, each fairly different than the other, making a pretty diverse and compact collage of punk. The album also never stagnates, maintaining interest throughout. It’s always baffled me how soon post punk started happening after the supposed beginning of punk rock just a year before with Ramones’ eponymous debut. Wire scratches a certain itch on Pink Flag that other punk acts don’t seem to even know about.

When it comes to songs, there's short and then there's too short. Still, it's a gas while it lasts.

Pink flag is a collection of short punk tunes, not all of them are great but its so short it will never make you wait.

Your feedback for Pink Flag