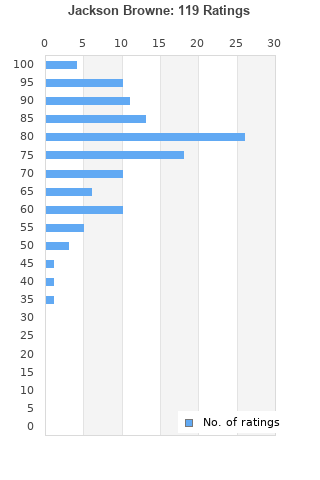 Jackson Browne : Lawyers in Love CD (1984) Highly Rated eBay Seller Great Prices
Condition: Very Good
Time left: 18m 25s
Ships to: Worldwide
£6.01
Go to store
Product prices and availability are accurate as of the date indicated and are subject to change. Any price and availability information displayed on the linked website at the time of purchase will apply to the purchase of this product.  See full search results on eBay

The best album by Jackson Browne is Late For The Sky which is ranked number 1480 in the list of all-time albums with a total rank score of 1,195. 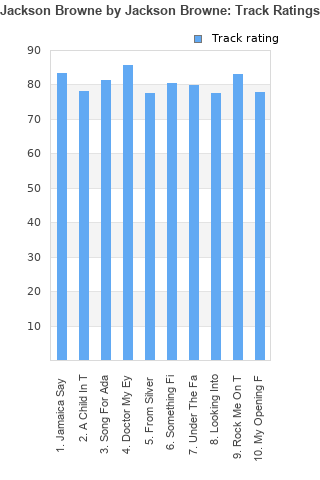 Rating metrics: Outliers can be removed when calculating a mean average to dampen the effects of ratings outside the normal distribution. This figure is provided as the trimmed mean. A high standard deviation can be legitimate, but can sometimes indicate 'gaming' is occurring. Consider a simplified example* of an item receiving ratings of 100, 50, & 0. The mean average rating would be 50. However, ratings of 55, 50 & 45 could also result in the same average. The second average might be more trusted because there is more consensus around a particular rating (a lower deviation).
(*In practice, some albums can have several thousand ratings)
This album is rated in the top 5% of all albums on BestEverAlbums.com. This album has a Bayesian average rating of 76.9/100, a mean average of 76.8/100, and a trimmed mean (excluding outliers) of 77.2/100. The standard deviation for this album is 13.5.

Browne's debut is full of piano-driven odes and ballads. He's a talented singer and songwriter, but tends to stick to similar structures, tempos and the same song keys...so it all kind of blends together, resulting in a pleasant, albeit forgettable, listening experience.

Are you kidding? Browne's best by far. Wonderful folk influence, but it's his striking imagery, youthful romanticism, and sage musings that really make this work. Listening to this album can't help but comfort you and bring happiness.

Criminally underrated album. Some of the best songs in all of Browne's career…"Something Fine", "Rock Me On the Water", "From Silver Lake", etc. are all worthy of 95-100 ratings. There's really not a moment of this record that I don't love, even if the production is a little rough, and it's second only to Late For the Sky in Browne's discography.

Jackson Browne's debut. Lots of folk influences here. Highlights include "Doctor My Eyes," "Rock Me on the Water," and "Jamaica Say You Will."

Not a bad album, but it fails in ever lifting off. Doctor My Eyes, Under the Falling Sky, and Rock Me on the Water stick out.

Your feedback for Jackson Browne