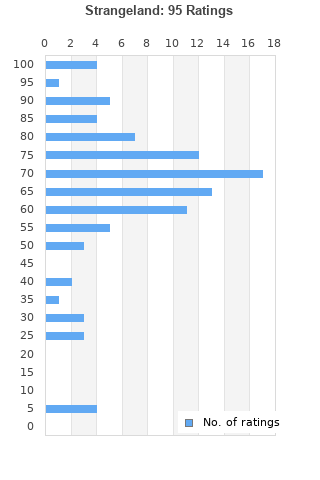 Strangeland.
Condition: Good
Time left: 2d 7h 4m 30s
Ships to: Worldwide
$9.99
Go to store
Product prices and availability are accurate as of the date indicated and are subject to change. Any price and availability information displayed on the linked website at the time of purchase will apply to the purchase of this product.  See full search results on eBay

Strangeland is ranked 3rd best out of 7 albums by Keane on BestEverAlbums.com.

The best album by Keane is Hopes And Fears which is ranked number 613 in the list of all-time albums with a total rank score of 3,053. 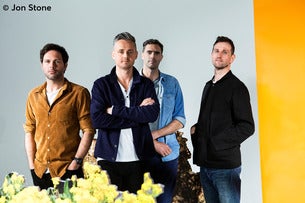 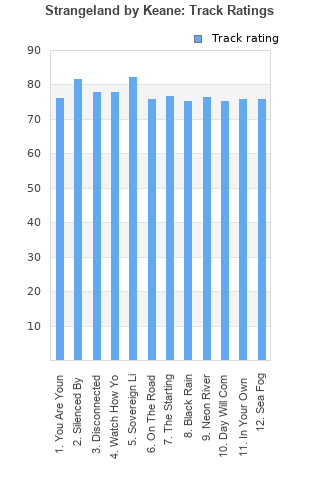 Rating metrics: Outliers can be removed when calculating a mean average to dampen the effects of ratings outside the normal distribution. This figure is provided as the trimmed mean. A high standard deviation can be legitimate, but can sometimes indicate 'gaming' is occurring. Consider a simplified example* of an item receiving ratings of 100, 50, & 0. The mean average rating would be 50. However, ratings of 55, 50 & 45 could also result in the same average. The second average might be more trusted because there is more consensus around a particular rating (a lower deviation).
(*In practice, some albums can have several thousand ratings)
This album has a mean average rating of 64.0/100. The trimmed mean (excluding outliers) is 63.7/100. The standard deviation for this album is 21.5.

Keane has received a lot of (sometimes unfair) thrashing since their first album, and the truth is they evolved their sound, not reaching the excellence of H&F but it was very complicated. Here they try to "return to basics" and, well, I enjoy listening to the album because I enjoy Keane. That's all. Nothing better than before, nothing different.

Should also be noted that the song listing here is for the standard CD, whereas the extended CD has I think 4 more tracks, including the title song, Strangeland.

After 8 months I still can't get enough of this album. I've held off on putting it in my top 10, but I think now it's going there. The album is beautifully melancholy while also being optimistic...the emotions that went into the songwriting on this album is as genuine as the guys in Keane. I've seen them live twice now, and am just stricken by how down to Earth they are.

The night train ran aground and the morning has come. Keane are left to start again and are now into the fourth album proper of their journey. Seems like ages since they started and we are only at number 4? Unfortunately, there isn't much to report on here. Prefect Symmetry was like a rubixs cube of quality, it was all over the place with few poor ones here or there. With songs like 'You are Young' and 'Disconnected' they plod along like this is some sort of career. Where is 'Atlantic' when you need it? That was a fantastic way to start an album! 'Silenced by the Night' is a sweet ditty melody which borrows a little (just a little) vein from 'How To Save a Life'. Weren't Keane the original 00's piano orientated band? The song struggles to keep my full attention to the end. There are some great strengths to Strangeland though. 'Sovereign Light Cafe' bursts open like a Piñata full of colored glass, in a bright and beautiful metaphorical way though. Not a "Oh God there is blood everywhere!" way. 'On The Road' continues the high pushing out and anthemic stadium sing a long for the young in heart. While the rest can be pleasant in places, nothing really stands out for attention. Have a feeling this album would do well with repeated listening. So yeah, try that. It's unchallenging and comfortable. But what is the problem with that?