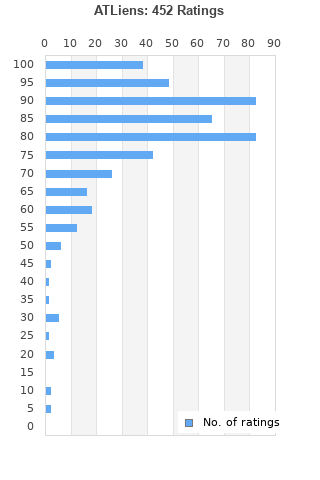 ATLiens is ranked 3rd best out of 7 albums by OutKast on BestEverAlbums.com.

The best album by OutKast is Aquemini which is ranked number 272 in the list of all-time albums with a total rank score of 6,967. 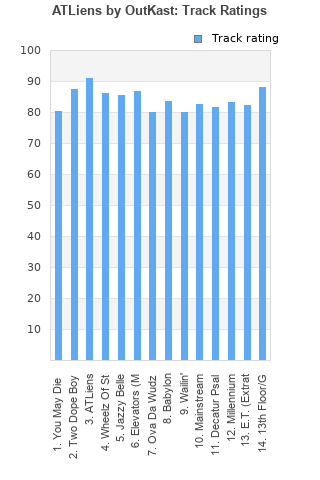 Rating metrics: Outliers can be removed when calculating a mean average to dampen the effects of ratings outside the normal distribution. This figure is provided as the trimmed mean. A high standard deviation can be legitimate, but can sometimes indicate 'gaming' is occurring. Consider a simplified example* of an item receiving ratings of 100, 50, & 0. The mean average rating would be 50. However, ratings of 55, 50 & 45 could also result in the same average. The second average might be more trusted because there is more consensus around a particular rating (a lower deviation).
(*In practice, some albums can have several thousand ratings)
This album is rated in the top 1% of all albums on BestEverAlbums.com. This album has a Bayesian average rating of 81.8/100, a mean average of 80.2/100, and a trimmed mean (excluding outliers) of 82.0/100. The standard deviation for this album is 16.1.

ATLiens has its own aesthetic that makes it great as a great hip hop album and that's its flow. I like it but compared to Aquemini, Aquemini is the better of the two. Maybe I am more used to Aquemini because I heard it so many times, but ATLiens is good but its not as developed as Aquemini.

Regardless it's something a hiphophead should hear.

I was expecting more spacey production based on what the critics were saying and it has like maybe 4 songs like that, the rest is something else. I gotta hear it more because I know what to expect and it will click eventually

Amazing album, one of the defining moments of southern hip hop.

Already a lot more artistically ambitious than Southernplayalisticadillacmuzik. I do think it falls a little flat in a couple of the songs, but there's not really a bad track on here. I love how they went with alien/space theme, the beats are really spacey and cloudy. Of course André 3000 and Big Boi are in rare form here. It's obvious to me why ATLiens is so fondly remembered.

If rapping is percussion, Outkast is jungle: they accelerate and put the break on their flow like they tryna shake someone off their tail. No one really does it like them, probably ‘cause no one can. Maybe with a bit of imagination you could say Eminem took some inspiration from them, though with much less swing (he did apparently think Andre 3000 was one of the best rappers ever). Together with the catchy hooks and funky, minimal beats, this album is a bliss to listen to.

My favorite album from Outkast. I remember growing up in the early 2000's and hit song like Ms.Jackson as well as The Way You Move were some of my all time favorite tracks. But with their albums, Atliens is my favorite due to being the most consistent album from them and still impresses me till now. I do believe albums like Aquemini and Speakerboxxx/The Love Below are technically better but Atliens just hits home. Standouts include Atliens, Jazzy Belle, Babylon, Mainstream and 13 Floor/Growing Old.

Legendary. 13th Floor/Growing Old is one of my all time favourites.

While I enjoy this album all the way, I found the first half clearly stronger like someone had said. Still, I'm now more intrigued to dive into OutKast's other works. I really like Elevator (Me and You) and Two Dope Boyz (In a Cadillac) the most from this album...

Your feedback for ATLiens