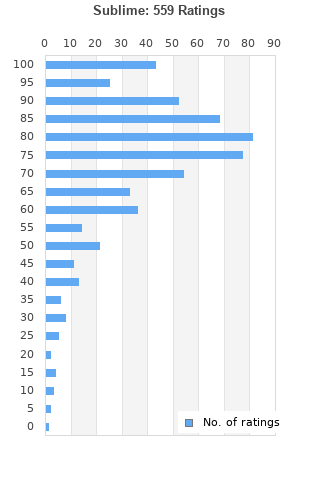 Sublime is ranked as the best album by Sublime. 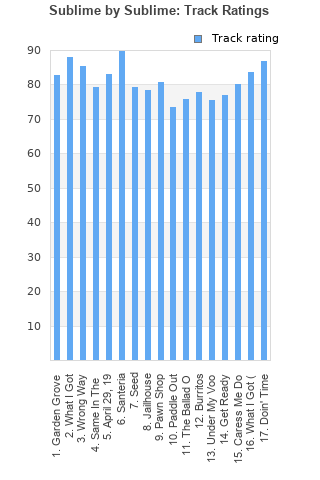 Rating metrics: Outliers can be removed when calculating a mean average to dampen the effects of ratings outside the normal distribution. This figure is provided as the trimmed mean. A high standard deviation can be legitimate, but can sometimes indicate 'gaming' is occurring. Consider a simplified example* of an item receiving ratings of 100, 50, & 0. The mean average rating would be 50. However, ratings of 55, 50 & 45 could also result in the same average. The second average might be more trusted because there is more consensus around a particular rating (a lower deviation).
(*In practice, some albums can have several thousand ratings)
This album is rated in the top 23% of all albums on BestEverAlbums.com. This album has a Bayesian average rating of 74.4/100, a mean average of 73.3/100, and a trimmed mean (excluding outliers) of 74.4/100. The standard deviation for this album is 19.0.

The people on this website are frustrating... I just don't get it lol. Great record, I don't care. 100 point to leverage majority's terrible opinion here lol.

Santeria, What I Got, Doin' Time are great, the rest is violently mediocre.

This album has some great tracks on it but is really let down by the more bland filler tracks. If you cut the album down a little it would be a fantastic record but the elongated run time and the several tracks which made me zone out makes it hard to give this record a high ranking. While there are a lot of positives like it being extremely chill and also a really unique album makes me be able to see why people would love this album. I also found the beats to be very catchy and the instrumentation that accompany them were really good as well. Overall, an album with a lot of potential but I don't think it is fully realised on this record.

This album is a vibe.

This album is so underrated, no other bands really have a sound like they do that are good. Slightly stoopid is the closest thing.

Fun album, some great songs on here but i feel like the songs that don't hold up make it drag on a little. Going to have to listen again as it might be a grower.

A number of good songs on this, but that's offset by some weak stuff.

This is one of those few albums that transcends all its influences to create something great. What I Got, Santiera, Wrong Way, but also a lot of the other songs have soul like Pawn Shop & Doin' Time.

Favorite Tracks: Wrong Way, Santeria & What I Got

Your feedback for Sublime