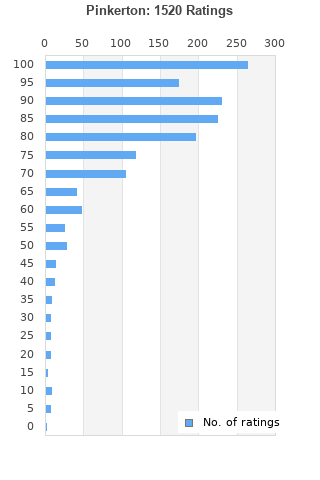 Pinkerton is ranked 2nd best out of 24 albums by Weezer on BestEverAlbums.com.

The best album by Weezer is Weezer (The Blue Album) which is ranked number 74 in the list of all-time albums with a total rank score of 19,239. 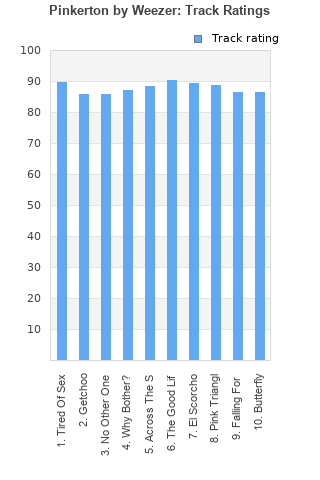 Rating metrics: Outliers can be removed when calculating a mean average to dampen the effects of ratings outside the normal distribution. This figure is provided as the trimmed mean. A high standard deviation can be legitimate, but can sometimes indicate 'gaming' is occurring. Consider a simplified example* of an item receiving ratings of 100, 50, & 0. The mean average rating would be 50. However, ratings of 55, 50 & 45 could also result in the same average. The second average might be more trusted because there is more consensus around a particular rating (a lower deviation).
(*In practice, some albums can have several thousand ratings)
This album is rated in the top 1% of all albums on BestEverAlbums.com. This album has a Bayesian average rating of 83.4/100, a mean average of 82.0/100, and a trimmed mean (excluding outliers) of 83.4/100. The standard deviation for this album is 17.4.

I do not get the ratings in BEA, IMHO this is not 112th best album ever, no way.
I can barely stand it for the energy the joy of making. It sounds very garage the playing is nothing special here. Some fun songs, yes, But not 112th best., no

Garbage garbage album. There is a good reason this album was so poorly received at the time it came out…it sucked.

Thankfully…Weezer made a a big comeback and managed to save their musical careers with The Green Album and Maladroit in the Early-2000’s.

I understand why none of the songs got much attention, commercially. But holy smokes…this is how you write an angst-ridden album. Still keeps much of the garage punk feel from the blue album…just with some extra perspective that comes with having to grow up quickly.

This is kind of the "outcast" of Weezer albums, in that it's less catchy and fun, and more honest and melodic. Very good stuff from a band that otherwise has a distinct sound and pattern that they follow.

One of the most honest, personal, emotional, passionate, relatable and soulful albums ever.

Almost as good as Blue. Still a perfect album in my opinion

Your feedback for Pinkerton