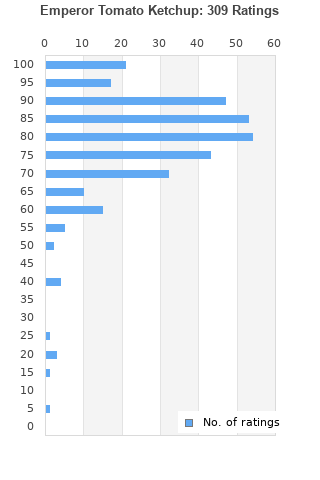 Stereolab Emperor Tomato Ketchup CD Ships Fast Elektra 1996
Condition: Very Good
Time left: 1d 13h 28m 45s
Ships to: Worldwide
$7.99
Go to store
Product prices and availability are accurate as of the date indicated and are subject to change. Any price and availability information displayed on the linked website at the time of purchase will apply to the purchase of this product.  See full search results on eBay

Emperor Tomato Ketchup is ranked as the best album by Stereolab. 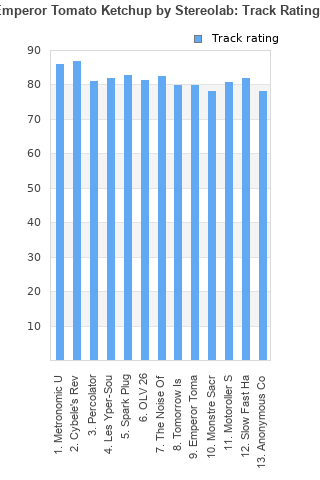 Rating metrics: Outliers can be removed when calculating a mean average to dampen the effects of ratings outside the normal distribution. This figure is provided as the trimmed mean. A high standard deviation can be legitimate, but can sometimes indicate 'gaming' is occurring. Consider a simplified example* of an item receiving ratings of 100, 50, & 0. The mean average rating would be 50. However, ratings of 55, 50 & 45 could also result in the same average. The second average might be more trusted because there is more consensus around a particular rating (a lower deviation).
(*In practice, some albums can have several thousand ratings)
This album is rated in the top 2% of all albums on BestEverAlbums.com. This album has a Bayesian average rating of 80.6/100, a mean average of 80.0/100, and a trimmed mean (excluding outliers) of 80.9/100. The standard deviation for this album is 14.2.

It starts off as very promising, but somewhere I felt the energy was lost. There were moments I found myself waiting for the vocals to come in (which were fantastic by the way) and that can never be a good thing, especially in such an album.

An absolutely marvelous record that is a shining example of why the 1990's are music's best decade. This Stereolab gem sounds like French aliens invaded Earth and decided to try their hand at pop music, and made a better album than anything that's been released in the last twenty years.

The evolution of this ensemble to true individual identity. Great songs from the start to the finish. An all-time favorite.

Most Stereolab albums are similarly groove-based and they're all great.

Who could of imagined that the missing ingredient to Kraftwerk’s Man-Machine was actually a French Woman? Those crazy Brits that’s who. Perhaps it took a little continental separation to realize that a chanteuse was the tonic to krautrock’s gin. Blend in secret weapon extraordinaire Mary Hansen’s bubbling champagne of background vocals, shake with the most famous Moog in rock history and voila - the cocktail Emperor Tomato Ketchup was born. Just perfect for any Space Age Bachelor Pad.

In fond memory to Mary Hansen from a fellow bicyclist. You were always the perfect Ying to Latetia’s Yang both on vocals and in spirit. You’ve been missed!

Your feedback for Emperor Tomato Ketchup