Being There (studio album) by Wilco 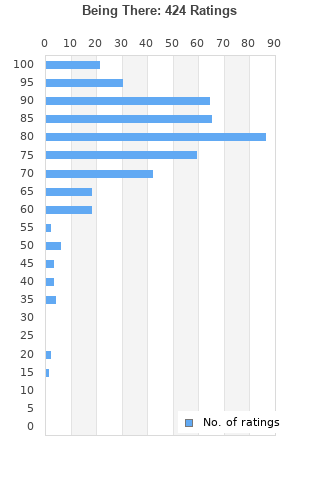 Being There is ranked 4th best out of 19 albums by Wilco on BestEverAlbums.com.

The best album by Wilco is Yankee Hotel Foxtrot which is ranked number 48 in the list of all-time albums with a total rank score of 24,168. 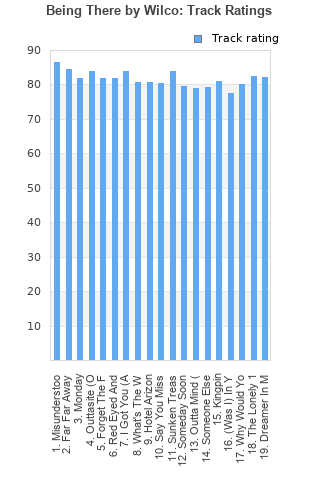 Rating metrics: Outliers can be removed when calculating a mean average to dampen the effects of ratings outside the normal distribution. This figure is provided as the trimmed mean. A high standard deviation can be legitimate, but can sometimes indicate 'gaming' is occurring. Consider a simplified example* of an item receiving ratings of 100, 50, & 0. The mean average rating would be 50. However, ratings of 55, 50 & 45 could also result in the same average. The second average might be more trusted because there is more consensus around a particular rating (a lower deviation).
(*In practice, some albums can have several thousand ratings)
This album is rated in the top 2% of all albums on BestEverAlbums.com. This album has a Bayesian average rating of 80.2/100, a mean average of 79.5/100, and a trimmed mean (excluding outliers) of 80.4/100. The standard deviation for this album is 13.4.

I generally agree with the ratings on here in relation to my favorite artists, but Being There is Tweedy's greatest work.

Average record that is just too long.

I don't normally 'get' Wilco. Summerteeth was quite good but I was disappointed with Yankee Hotel Foxtrot after all the hype it gets. Then again I've only heard it twice. But this breezy album blew me away. I love it. This is far more my cup of tea. Funny how the same band can produce such different albums. It was a couple of years ago I heard YHF so I will have to go back and listen to it again and re-assess it. I like it when one album totally changes my opinion of a band. It's a nice surprise.

Not reaching later heights, but very recognizable in their musical dress.

When I first heard "Misunderstood" I was like how can I never heard this before, How It isn't praised as much as "Jesus etc", It is such a good song. And don't even get me started on "Far, Far Away" which I personally think It is even better, I mean, is so simple and It still gives you that feeling of transcendence, It is such a relaxing tune. After all I said I still feel like I don't know about everything on this album.

This album is schizophrenic but it works. There is a nice balance between different sounds. Forget the Flowers, outtasite outtamind, and I Got You are stand out songs on a very good album.

During the mid-nineties, Wilco inevitably seemed to be in a kind of competition with Son Volt, the band of Jeff Tweedy's former Uncle Tupelo collaborator Jay Farrar. The acrimonious relationship between the two was well documented, and the two bands always seemed to release new albums within a few months of each other, so the comparisons became inevitable. Being There was the album where Wilco established its dominance in the imaginary competition (whereas Son Volt released the relatively lackluster Straightaways that same year), and the band hasn't let up since. This is a terrific rock album with traces of the experimentation that was to come. The wordplay in "Red-Eyed and Blue" shows Tweedy in a creative mood, one that was to become ever more expansive and brilliant as his career has gone along.

An, exile on main st., for the nineties. It's categorised as alt.country but in truth it's just good old rock'n'roll. Opener, misunderstood,, gets things off on a strong note, and from there on it's a great fun rock record, from the acoustic, far far away, to the ballsy, outta site. The LP is full of atmosphere and grit. One of the outstanding albums of the nineties.

Your feedback for Being There