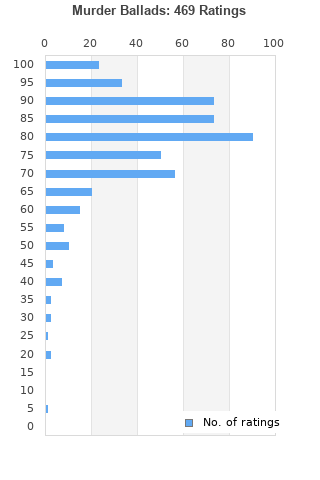 Murder Ballads is ranked 6th best out of 26 albums by Nick Cave & The Bad Seeds on BestEverAlbums.com.

The best album by Nick Cave & The Bad Seeds is The Boatman's Call which is ranked number 387 in the list of all-time albums with a total rank score of 4,958. 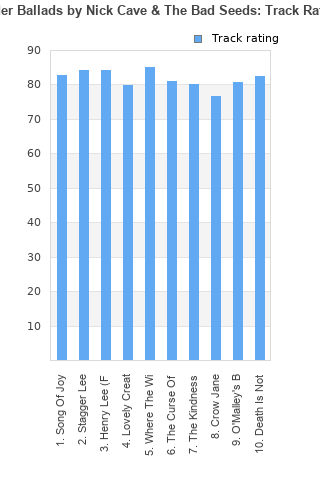 Rating metrics: Outliers can be removed when calculating a mean average to dampen the effects of ratings outside the normal distribution. This figure is provided as the trimmed mean. A high standard deviation can be legitimate, but can sometimes indicate 'gaming' is occurring. Consider a simplified example* of an item receiving ratings of 100, 50, & 0. The mean average rating would be 50. However, ratings of 55, 50 & 45 could also result in the same average. The second average might be more trusted because there is more consensus around a particular rating (a lower deviation).
(*In practice, some albums can have several thousand ratings)
This album is rated in the top 2% of all albums on BestEverAlbums.com. This album has a Bayesian average rating of 79.4/100, a mean average of 78.6/100, and a trimmed mean (excluding outliers) of 79.5/100. The standard deviation for this album is 14.4.

An album full of stories about death. Not as dark as you 'd expect based on that description due to the occasional humorous addition. The music stays in the background and is used mainly to emphasize the narrative.

Great album. Epic stories envisioning horrific events. A true bard of the darker scale. His crooning is hypnotizing yet so gentle amid morbid tales. 'Death is not the end' is my personal pick of the bunch. His song writing and vocals make him one of a kind. Original brilliance.

Great collection of songs about murder.

O'Malley's Bar is great; the collaborations with P.J. Harvey and Kylie Minogue are top notch; Stagger Lee is brilliant; and Bob Dylan would have been proud to write The Curse of Millhaven.

Great stuff all round.

Haunting. My introduction to Nick Cave & The Bad Seeds. I had heard of Nick Cave from his previous association with The Birthday Party - but hadn't scored any of either band's music until "Murder Ballads". While disturbing lyrically, I found this album to be delightful!

My first foray into Nick Cave's catalogue and my god, what a start. A brilliant post-punk(ish) record with dark (yet somehow humorous) lyrics.

Interesiting set of songs about death, but I think this limitation holds the album a bit back.

So I'm currently working at an Applebees as a server. They have one of those TouchTunes jukeboxes and I just downloaded the app for it. That way I can play music without being judged by others for my superior taste. Around 11 PM I played "Stagger Lee" and followed it up with "O'Malley's Bar." It was fun watching the reactions of the forty or so customers in the building. When Cave exclaims that his "dick felt long and hard" there was an uproar of laughter (incidentally most rap music is banned on there due to the lyrics but most other explicit music is still available). The only person that seemed to be having a cow about it was the bartender. She's such a lamestain. But the best part is they had no idea it was me, I'm off work today, and it's April Fools Day. And it's Easter so there's gonna be a lot of churchgoing families eating out. I'm probably gonna drive up there and to a couple other places with the jukebox, without even getting out of the car, just to hit them with some unexpected savagery.

It's hard to believe that, of all of his albums, this was Nick Cave's most commercially successful. Imagine all of the soccer moms that bought it because of the single with Kylie Minogue only to hear something like Stagger Lee!

Your feedback for Murder Ballads