If You're Feeling Sinister (studio album) by Belle And Sebastian

If You're Feeling Sinister by Belle And Sebastian
Year: 1996
Overall rank: 118th 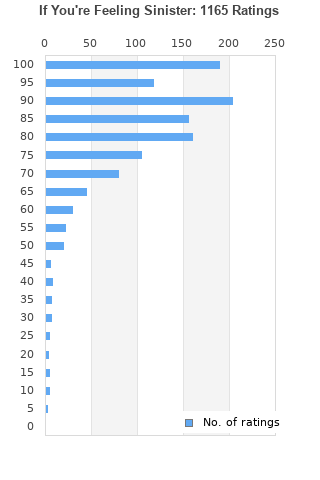 If You're Feeling Sinister is ranked as the best album by Belle And Sebastian. 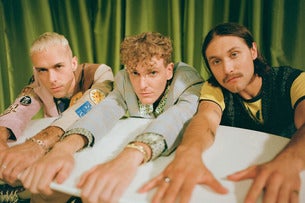 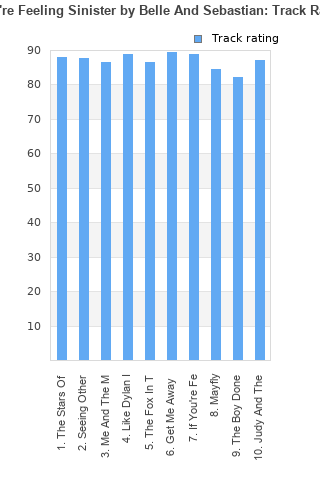 #
Track
Rating/Comments
1.
The Stars Of Track And Field
Rating: 88 (288 votes)Comments:

If You're Feeling Sinister
Rating: 89 (285 votes)Comments:

If You're Feeling Sinister rankings

If You're Feeling Sinister collection

If You're Feeling Sinister ratings

Rating metrics: Outliers can be removed when calculating a mean average to dampen the effects of ratings outside the normal distribution. This figure is provided as the trimmed mean. A high standard deviation can be legitimate, but can sometimes indicate 'gaming' is occurring. Consider a simplified example* of an item receiving ratings of 100, 50, & 0. The mean average rating would be 50. However, ratings of 55, 50 & 45 could also result in the same average. The second average might be more trusted because there is more consensus around a particular rating (a lower deviation).
(*In practice, some albums can have several thousand ratings)
This album is rated in the top 1% of all albums on BestEverAlbums.com. This album has a Bayesian average rating of 83.2/100, a mean average of 82.0/100, and a trimmed mean (excluding outliers) of 83.3/100. The standard deviation for this album is 16.3.

If You're Feeling Sinister favourites

If You're Feeling Sinister comments

First listen:Cute music where all songs sound the same.

There's great work, and then there's work that transforms you as a person. It grips the trunk of your soul and shakes the rotten fruit from your branches.

If You're Feeling Sinister killed a part of me that was infected. When you grow up in a religious, far-right household, parts of you are bound to be deeply, irreparably sick, and the only treatment is to identify those parts and cut them out. Stuart Murdoch's loving, careful depictions of various regular people, the kinds of regular people that operate in direct opposition to the Puritan Work Ethic and thundering heterosexuality of the church, tenderly taught me what was sick and what was well...and sounded damn good while doing it.

As a young teenager, listening to this album made me feel guilty. Loving it left me feeling liberated. So I listened and listened until I couldn't feel guilty anymore.

There’s times where this really grabs your attention. Like the singer is telling a story that matters. Too often, however, it’s a breathlessly sung tale of another depressing situation played over repetitively strummed chords.

Favorite album of my favorite band of my post-university life. Wonderful songs. Great vibe. Their run from 96-98 is incredible. Highly recommend.

At times moving, although I felt that the album's quality tailed off on the second side. The melodies also feel very borrowed from various VU tracks and Nico tracks. Good, but not deserving of a spot in the album canon.

An interesting thing about this record is the influence of The Velvet Underground. The influence is subtle, but it becomes obvious if you know what to listen for. Murdoch's voice even seems to emulate Nico's on the VU debut.

Your feedback for If You're Feeling Sinister