Everything Must Go (studio album) by Manic Street Preachers 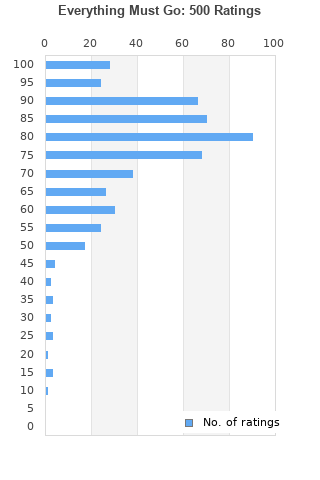 Everything Must Go is ranked 2nd best out of 17 albums by Manic Street Preachers on BestEverAlbums.com.

The best album by Manic Street Preachers is The Holy Bible which is ranked number 457 in the list of all-time albums with a total rank score of 4,092. 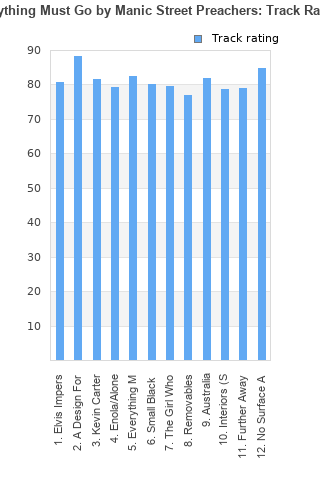 Everything Must Go rankings

Everything Must Go collection

Everything Must Go ratings

Rating metrics: Outliers can be removed when calculating a mean average to dampen the effects of ratings outside the normal distribution. This figure is provided as the trimmed mean. A high standard deviation can be legitimate, but can sometimes indicate 'gaming' is occurring. Consider a simplified example* of an item receiving ratings of 100, 50, & 0. The mean average rating would be 50. However, ratings of 55, 50 & 45 could also result in the same average. The second average might be more trusted because there is more consensus around a particular rating (a lower deviation).
(*In practice, some albums can have several thousand ratings)
This album is rated in the top 5% of all albums on BestEverAlbums.com. This album has a Bayesian average rating of 77.1/100, a mean average of 76.3/100, and a trimmed mean (excluding outliers) of 77.1/100. The standard deviation for this album is 15.5.

Everything Must Go favourites

Everything Must Go comments

This albums rocks, but also it sounds so good, guitars do more than just strum, they play them beautifully.

Favorite Tracks:Elvis Impersonator Blackpool Pier, Small Black Flowers That Grow In The Sky, The Girl Who Wanted To Be God, Removables

For me a big improvement on the nihilism of the Holy Bible (which I can't get on with). The stand out is obviously A Design For Life, but there are six other tracks I rate at 85.

Released in 1996 at the zenith of Brit-Pop mania Manic Street Preachers were seemingly the ugly buck toothed cousins of the poster-boys Oasis and Blur . Everything Must Go whilst critically acclaimed never sold a fraction of Oasis and Blurs mega selling releases around that time & that's a shame because this is a cool album

As first release by the band post Richey Edwards disappearance there's plenty to like here with great lyrics , excellent riffs and drums front and center

Being Australian myself I had a real "Oh Yeah " moment when track 9 'Australia' came on as I recalled someone had played this track to me MANY years previous ( the track is actually about wanting to get as far away from Wales as possible to escape the pressures post RE disappearance , in actual fact New Zealand is further away from Wales so that should have been the song )

not the coolest of records and it wasn't even at the time. Just look at the cover. Another triptych, is maybe to be seen juxtaposed with the holy bible cover, the follow up representing the opposite of its predecessor: clean, fresh, new etc. which is how it sounds with its shiny pop rock stadium thingys. And Britpop, I mean how dare they. A pal at the time who loved the previous record said they have now gone bryan Adams. Well the previous record was cool, and was full of dark lyrical alt rock masterpieces. It's geat yeah. They lost their troubled lyric genius. Maybe they should have tried to make a pantera meets NIN like richey wanted. No. They regrouped and came back with the greatest comeback records ever. That sounded nothing like the previous. But it's filled with heart and soul and a desire and spirit to continue forward. It's pop it's stadium it has one of the great final tracks and if you are too cool to submit to it then go play holy bible again, cry sell out and hope that you can forgive them.

Bringing in strings and big choruses to make a stadium rock sound, this is a much more mature album, and it's a masterpiece

Very good album. It lacks of something in the middle, but the end is great.

I'm not sure about this one, probably because I preferred their albums with Richey Edwards. I might get used to it one day.

Their 2nd best album (after "The Holy Bible").
Best tracks: A Design for Life, Everything Must Go, No Surface All Feeling, Small Black Flowers That Grow in the Sky.

Your feedback for Everything Must Go