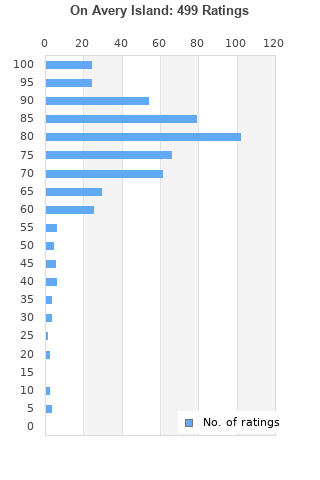 ON AVERY ISLAND NEW VINYL
Condition: New
Time left: 2d 21h 47m 12s
Ships to: Worldwide
$20.57
Go to store
Product prices and availability are accurate as of the date indicated and are subject to change. Any price and availability information displayed on the linked website at the time of purchase will apply to the purchase of this product.  See full search results on eBay

On Avery Island is ranked 2nd best out of 6 albums by Neutral Milk Hotel on BestEverAlbums.com.

The best album by Neutral Milk Hotel is In The Aeroplane Over The Sea which is ranked number 15 in the list of all-time albums with a total rank score of 50,724. 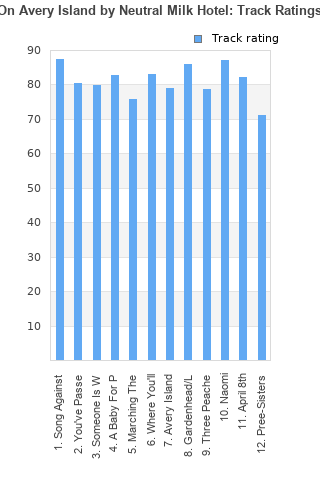 Rating metrics: Outliers can be removed when calculating a mean average to dampen the effects of ratings outside the normal distribution. This figure is provided as the trimmed mean. A high standard deviation can be legitimate, but can sometimes indicate 'gaming' is occurring. Consider a simplified example* of an item receiving ratings of 100, 50, & 0. The mean average rating would be 50. However, ratings of 55, 50 & 45 could also result in the same average. The second average might be more trusted because there is more consensus around a particular rating (a lower deviation).
(*In practice, some albums can have several thousand ratings)
This album is rated in the top 3% of all albums on BestEverAlbums.com. This album has a Bayesian average rating of 78.2/100, a mean average of 77.0/100, and a trimmed mean (excluding outliers) of 78.3/100. The standard deviation for this album is 14.8.

There were some good moments but nothing compared to their masterpiece in the aeroplane over the sea. A lot of songs that were too experimental for me also.

This takes second place in a race where only first matters. If you like this, you will like their "big" album even more. If you don't like In The Aeroplane Over The Sea, you won't like this one as well.

i still get chills

This is very powerful for me, as strong as an statement as In the Aeroplane Over The Sea. It is quite understandable why this album is often overlooked, It is especially lo-fi in some parts, what almost makes a bunch of noise in the first listen, but It is exactly this mess that I Fell in love with. It reminds me of Car Seat Headrest.

Although it's not a very good album (the compositions are average), On Avery Island lays the foundation for the great In the Aeroplane Over the Sea.

Really a great album. Shows what NMH are capable of. Standouts for me are Gardenhead and Naomi. Three Peaches is a low light that leaves the gap between the two with something to be desired. I'm not sure how I feel about the instrumental.

This confirms they were not an one album wonder.

It NMH so of course its great ! . Takes a few listens but its absolutely tremendous

give this album a credit!

Great album...quite different from Aeroplane and enjoyable, perhaps feels like there are some tracks on here that are filling in, but more quality than not.

Your feedback for On Avery Island