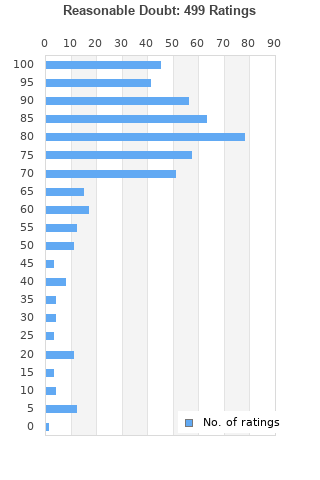 Reasonable Doubt Jay-Z CD Bonus Track
Condition: Very Good
Time left: 2d 16m 14s
Ships to: Worldwide
$39.95
Go to store
Product prices and availability are accurate as of the date indicated and are subject to change. Any price and availability information displayed on the linked website at the time of purchase will apply to the purchase of this product.  See full search results on eBay

Reasonable Doubt is ranked 2nd best out of 16 albums by Jay-Z on BestEverAlbums.com.

The best album by Jay-Z is The Blueprint which is ranked number 510 in the list of all-time albums with a total rank score of 3,761. 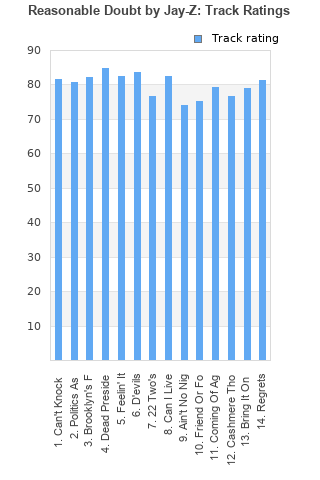 Rating metrics: Outliers can be removed when calculating a mean average to dampen the effects of ratings outside the normal distribution. This figure is provided as the trimmed mean. A high standard deviation can be legitimate, but can sometimes indicate 'gaming' is occurring. Consider a simplified example* of an item receiving ratings of 100, 50, & 0. The mean average rating would be 50. However, ratings of 55, 50 & 45 could also result in the same average. The second average might be more trusted because there is more consensus around a particular rating (a lower deviation).
(*In practice, some albums can have several thousand ratings)
This album is rated in the top 7% of all albums on BestEverAlbums.com. This album has a Bayesian average rating of 76.4/100, a mean average of 74.4/100, and a trimmed mean (excluding outliers) of 76.5/100. The standard deviation for this album is 22.6.

Production, lyrics, delivery, everything works. A classic for a reason.

A few memorable moments, but not much that sticks with me.

Good rap album a little bit over average but jay-z is smooth on this record. Favorite song: Dead Presidents II

Nearly the entire first half of Reasonable Doubt is stellar. Effortlessly engaged from the beginning with a particularly good opening track. There's a bit to sift through as the album enters its 3rd quarter, but overall so much incredible word play and tremendous drum sound. A great record.

Jay-Z just really seems to be more in his element in the '90s. "Jay-Z, Big Smalls nigga, shit ya draws" is the type of hip hop obnoxiousness I can stomach because of the perfect amount of humor. The flow really is off the charts on this one. Where had it gone after the turn of the milennium? Maybe still there though, the beats just don't fit anymore, he need that boom bap.

This really sounds more pure... if you will. It's Jay-Z without the artificial colour or flavour.

Pretty cool, on first listen. I think its score will rise.

An epic Jay-Z album that tells his story of drug dealer to rapper beautifully.

Jay is an unquestioned top 5 dead or alive rapper and this is generally considered his best project. I'm not saying it should be praised like some high tier Radiohead record but it's overall stats are ridiculous and Dead Presidents II being below an 88 is unacceptable.

Fuck Tidal, has fallen off my charts due to not ever being able to listen to it

Your feedback for Reasonable Doubt