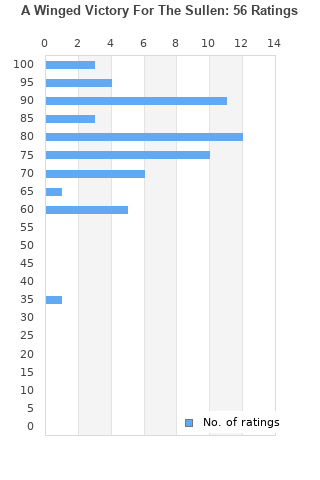 A Winged Victory For The Sullen bestography

Listen to A Winged Victory For The Sullen on YouTube 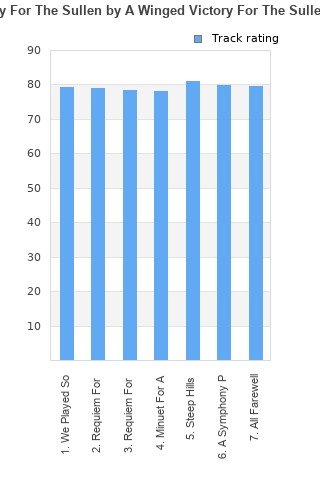 #
Track
Rating/Comments
1.
We Played Some Open Chords And Rejoiced, For The Earth Had Circled The Sun Yet Another Year
Rating: 79 (6 votes)Comments:

A Winged Victory For The Sullen rankings

A Winged Victory For The Sullen collection

A Winged Victory For The Sullen ratings

Outliers can be removed when calculating a mean average to dampen the effects of ratings outside the normal distribution. This figure is provided as the trimmed mean. A high standard deviation can be legitimate, but can sometimes indicate 'gaming' is occurring. Consider a simplified example* of an item receiving ratings of 100, 50, & 0. The mean average rating would be 50. However, ratings of 55, 50 & 45 could also result in the same average. The second average might be more trusted because there is more consensus around a particular rating (a lower deviation).
(*In practice, some albums can have several thousand ratings)
This album is rated in the top 2% of albums on BestEverAlbums.com. This album has a mean average rating of 80.0/100. The trimmed mean (excluding outliers) is 80.3/100. The standard deviation for this album is 11.3.

A Winged Victory For The Sullen favourites

A Winged Victory For The Sullen comments

Angels can sin. I bet you didn’t know that. But they can. They can take their station next to God for granted. Become ungrateful. Arrogant. And then they fall to Earth. To watch over us. As penance to get back into God’s graces. They don’t know how many souls they have to save. It could be five. It could be five million. There is simply no way of knowing. The grief of no longer feeling God’s radiance is incalculable. He feels empty. Abandoned. Imagine being cast out into the Alaskan tundra after spending your entire life lazing on the beaches of Costa Rica. And you've just begun to scratch the surface.

This album is filled with the grief and mourning of this fallen angel. As he flies above us. Detached and aloof from the souls he has been decreed to save. Because he cannot directly interact with us. That is against the rules. He must guide us in subtle ways. Gently shift our trajectories. So that we can find God’s radiance ourselves. The radiance our banished angel has lost.

His grief at letting down God is palpable. The songs are full of his repentance. His cry to God to please forgive him. That he will atone for his sins. That he has been humbled. But also his reverence. For God. For his home. For this is not an Earthly album. It’s celestial. It’s concern is with the heavens. The skies far above. A deep longing to return home. Where he belongs. And he knows he can get there. With patience & perserverance. Until then he watches. And waits. To prove himself worthy of God’s love again.

Grade: A. If Godspeed You Black Emperor made an ambient album this is what it would sound like. It’s massive. But the greatest thing I love about it about it is how it gives you the impression that you’re flying. That you’re one with the clouds above looking down far removed from the trivial ongoings of day to day life. Its pressures and its strife. That instead you are content to just contemplate the heavens above. And wonder and ponder how to get there. Just like our fallen angel. And it flies all the way up to number 9. (Number 7 would be be more fitting but what the hell.)

Your feedback for A Winged Victory For The Sullen