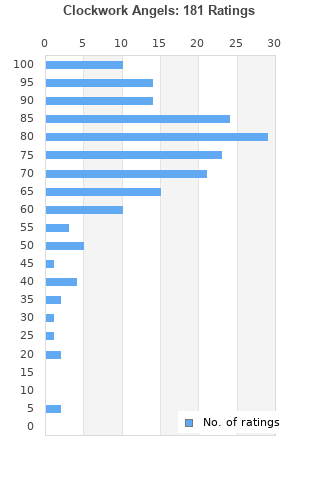 Clockwork Angels is ranked 12th best out of 35 albums by Rush on BestEverAlbums.com.

The best album by Rush is Moving Pictures which is ranked number 155 in the list of all-time albums with a total rank score of 11,846. 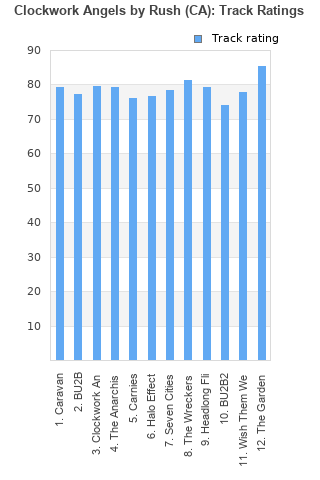 Outliers can be removed when calculating a mean average to dampen the effects of ratings outside the normal distribution. This figure is provided as the trimmed mean. A high standard deviation can be legitimate, but can sometimes indicate 'gaming' is occurring. Consider a simplified example* of an item receiving ratings of 100, 50, & 0. The mean average rating would be 50. However, ratings of 55, 50 & 45 could also result in the same average. The second average might be more trusted because there is more consensus around a particular rating (a lower deviation).
(*In practice, some albums can have several thousand ratings)
This album is rated in the top 12% of albums on BestEverAlbums.com. This album has a mean average rating of 74.0/100. The trimmed mean (excluding outliers) is 75.6/100. The standard deviation for this album is 17.6.

The best Rush album since years. They are still in business

Wow... They're still doing it! Perhaps their best album since Moving Pictures. "The Garden" is incredible.

The Garden
The Wreckers
Wish Them Well
Seven Cities of Gold

A surprisingly fantastic album from 60 year old Canadians. One of my personal favorites, and a fitting swan song for Rush (assuming this is their last album)

Rush is definitely breaking the formula here. Lots of Arabic sounding stuff. I like it a lot.

Easily Rush's best album in decades! The scope of its story is matched by the usual Rush progressive tendencies and outstanding musicianship. The ambition of this album is unprecedented even in Rush's storied history, and they pull it off magnificently.

Like many, I find the production to be a little thick and I would have liked more space in the music, but for me that's a small nit to pick relative to all the great things this album has to offer

Clockwork Angels is Rush's most recent studio album, and possibly their last. If it is their last studio album, then they'd be going out on a high note, as this was their best album is several decades, possibly since the mid 80s. Featuring Peart's fantasy lyrics, they expanded the story line to cover the entire album. The story is fun, the instrumentation is top-notch as is the norm for Rush, and the album just works in a way their albums haven't for some time. Most of the tracks are highlights in my opinion, with the exceptions being "Halo Effect", "BU2B2", and "The Garden", which are just a step below the quality of the rest of the album. Really great work, and would be an excellent farewell album from one of the best bands to ever come out of Canada.

It's the production that kills this album. I get a feeling of drowning when I listen to this album. More air, Rush!

Honestly not sure why this album isn't rated higher. It's not Rush's best work, but it's their best record easily in 20 years. Plus, given that this record comes 40 years into their career and still kicks ass on a number of tracks is something to be impressed by also. Overall, there are a few tracks that don't stand up to the others but I like the story of the album a lot.

Something about an oppressive society. Something about getting what you deserve. Something about someone trying to change the system. All recorded by Rush many years into their days. 'Caravan', 'BU2B' and 'Headlong Flight' are some of the best Rush have recorded. Certainly their best year this millennium.

Your feedback for Clockwork Angels