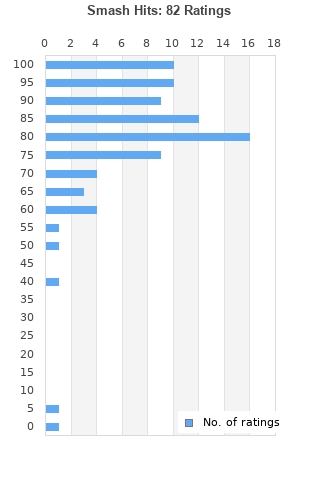 Smash Hits is ranked 4th best out of 22 albums by The Jimi Hendrix Experience on BestEverAlbums.com.

The best album by The Jimi Hendrix Experience is Are You Experienced which is ranked number 40 in the list of all-time albums with a total rank score of 27,290. 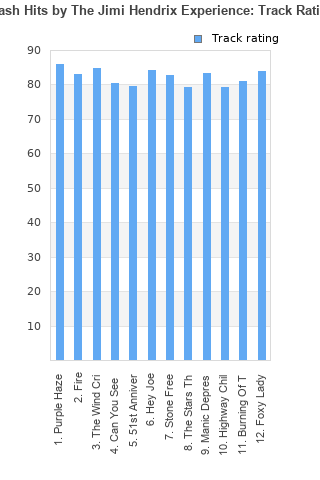 Rating metrics: Outliers can be removed when calculating a mean average to dampen the effects of ratings outside the normal distribution. This figure is provided as the trimmed mean. A high standard deviation can be legitimate, but can sometimes indicate 'gaming' is occurring. Consider a simplified example* of an item receiving ratings of 100, 50, & 0. The mean average rating would be 50. However, ratings of 55, 50 & 45 could also result in the same average. The second average might be more trusted because there is more consensus around a particular rating (a lower deviation).
(*In practice, some albums can have several thousand ratings)
This album is rated in the top 1% of all albums on BestEverAlbums.com. This album has a Bayesian average rating of 81.6/100, a mean average of 80.7/100, and a trimmed mean (excluding outliers) of 82.7/100. The standard deviation for this album is 17.4.

A decent comp, but for my money, the "Experience Hendrix" compilation is the one to get.

The track listing for this is completely up the spout. The original UK issue maintains a much more bluesy feel, omitting amongst others ...Watchtower, Remember and Crosstown Traffic and adding Highway Chile, ...Midnight Lamp and a couple of B-sides. For this reason it's worth having as there's a fair bit on this compy that aren't on the original LPs. To rate it 0 or 5/100 is just ludicrous.

Your feedback for Smash Hits