Are You Experienced (album) by The Jimi Hendrix Experience Are You Experienced by The Jimi Hendrix Experience
Year: 1967
Overall rank: 38th 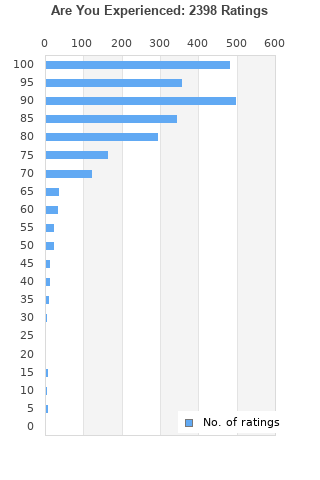 The Jimi Hendrix Experience - Are You Experienced 1967 UK LP MONO 1st PSYCH
Condition: Used
Time left: 19h 40m 22s
Ships to: Worldwide
£59.00
Go to store
Product prices and availability are accurate as of the date indicated and are subject to change. Any price and availability information displayed on the linked website at the time of purchase will apply to the purchase of this product.  See full search results on eBay

Are You Experienced is ranked as the best album by The Jimi Hendrix Experience. 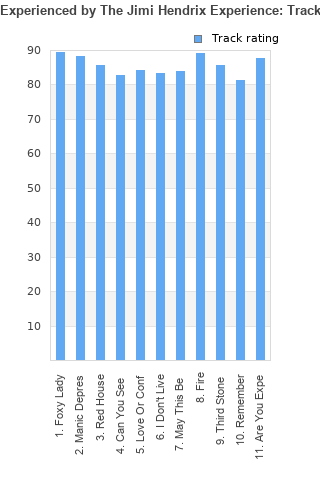 Are You Experienced rankings

Are You Experienced collection

Are You Experienced ratings

Rating metrics: Outliers can be removed when calculating a mean average to dampen the effects of ratings outside the normal distribution. This figure is provided as the trimmed mean. A high standard deviation can be legitimate, but can sometimes indicate 'gaming' is occurring. Consider a simplified example* of an item receiving ratings of 100, 50, & 0. The mean average rating would be 50. However, ratings of 55, 50 & 45 could also result in the same average. The second average might be more trusted because there is more consensus around a particular rating (a lower deviation).
(*In practice, some albums can have several thousand ratings)
This album is rated in the top 1% of all albums on BestEverAlbums.com. This album has a mean average rating of 86.0/100. The trimmed mean (excluding outliers) is 87.3/100. The standard deviation for this album is 13.3.

Are You Experienced favourites

Are You Experienced comments

This album was the begin of the era of guitarist. Jimi Hendrix played so good that nobody could reach him. I like this album very much one of the best, Foxy Lady is my all time favorite. A recommendation to hear, you would be surprised.

My rating's based on this version of the album however.

Absolute magic. The almost crap production actually, somehow, really adds to the charm.
If you listen to either version, U.K. or U.S., I feel sorry for you. You're missing out on some really quality tracks. Combine both versions and you get one of the best albums ever.

First, as everybody has already said: the US version is far better.

Now, back to the album. This is the sound that everybody who picks a guitar up wants to imitate. The lyricism achieved by Hendrix gives the impression of nature. Hendrix was born with a guitar in hand and the notes already ran free in his mind even before his conception. It was in his genes. And it wasn't like that.

I remember hearing this anecdote on a documentary and it goes something like this. A young Jimi, gets in to a big band. He is enthusiastic, but not to skilled. He falls out of tempo, misses some notes, has a dirty sound. I mean he is not awful, but he is not the guitar master that rules on the Olympus of Rock Gods. He is a guy that gets fired because somebody played better than him. So what he did after this little failure.

Well, the story is messianic and part of the Hendrix myth. He disappears. Some former band members of his, and some other friends know he is alive, but think he doesn't want anything to do with music anymore. A year and a half later, he reappears and plays with the core sound and compositions of what would become in 1967 his first 2 albums. Apparently, he isolated himself all that time to practice and master his abilities, to find the correct pitch for his instrument. The work has paid off in crescendo.

You can hear it on Fire, The Wind Cries Mary, but to me the freedom achieved by practice is mostly pictured in my favorite of this album, Third Stone From The Sun.

A truly masterpiece. Hendrix was so magical

Why is the UK version listed here as opposed to the much superior US version? Seems a disservice to the memory of a legend who left us much too soon.

My personal favourite of the three. Really good album. His guitar playing is incredible as expected, but I feel Jimi's vocals and lyrics are underrated. Also the drumming and bass work are really good as well.

This comment is for the US version (since the UK version doesn't have Purple Haze or Hey Joe, that's a crime). Awesome album. This shows why Jimi is the greatest guitarist ever. Standouts are Purple Haze, Hey Joe, May This Be Love, Fire, and Foxey Lady.

I'm using this space to rate the NA version. Incredible album. So many classics that I've known for years that I didn't even know were on the same album. It's been said before but, now that I've been acquainted with it, I can't imagine listening to another cut of this album. One of the best guitarists I've ever heard, amazing songwriting and just enough experimentation. Definitely one of the best albums ever and certainly one of the most influential. I'll listen to the European release someday to see how it compares.

Your feedback for Are You Experienced