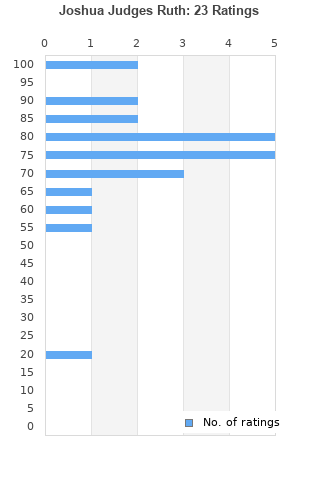 Joshua Judges Ruth is ranked 4th best out of 15 albums by Lyle Lovett on BestEverAlbums.com.

The best album by Lyle Lovett is Pontiac which is ranked number 5938 in the list of all-time albums with a total rank score of 217. 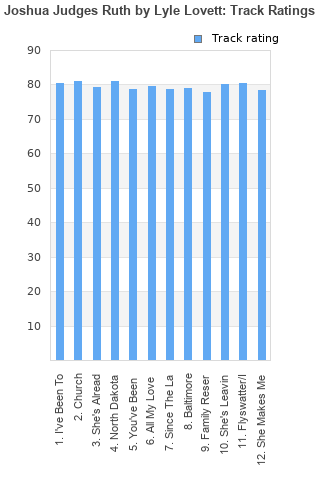 Rating metrics: Outliers can be removed when calculating a mean average to dampen the effects of ratings outside the normal distribution. This figure is provided as the trimmed mean. A high standard deviation can be legitimate, but can sometimes indicate 'gaming' is occurring. Consider a simplified example* of an item receiving ratings of 100, 50, & 0. The mean average rating would be 50. However, ratings of 55, 50 & 45 could also result in the same average. The second average might be more trusted because there is more consensus around a particular rating (a lower deviation).
(*In practice, some albums can have several thousand ratings)
This album is rated in the top 5% of all albums on BestEverAlbums.com. This album has a Bayesian average rating of 76.6/100, a mean average of 75.7/100, and a trimmed mean (excluding outliers) of 78.5/100. The standard deviation for this album is 16.6.

Lyle Lovett is a strange bird, but his formula of genre-bending works best here with lyrics that are mostly complimentary and his his by far his finest album.

You have the blues on I've Been to Memphis, gospel on Church, folk on North Dakota, rock on Been So Good, swing on All My Love is Gone and country on She's Leaving Me.

The lyrics are a little rocky, but if you love lyrics about food, Lyle's got you covered. He'll sing about beans, cornbread and peanut butter and jelly until you salivate.

A Side: You've Been So Good Up to Now
B side: Family Reserve

Your feedback for Joshua Judges Ruth