Coexist (studio album) by The xx 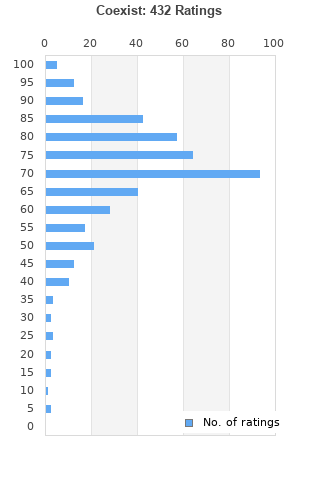 Coexist is ranked 2nd best out of 4 albums by The xx on BestEverAlbums.com.

The best album by The xx is xx which is ranked number 327 in the list of all-time albums with a total rank score of 5,806. 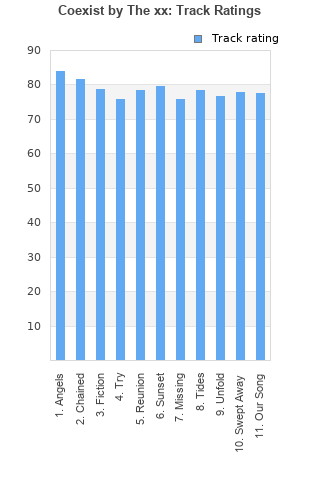 Rating metrics: Outliers can be removed when calculating a mean average to dampen the effects of ratings outside the normal distribution. This figure is provided as the trimmed mean. A high standard deviation can be legitimate, but can sometimes indicate 'gaming' is occurring. Consider a simplified example* of an item receiving ratings of 100, 50, & 0. The mean average rating would be 50. However, ratings of 55, 50 & 45 could also result in the same average. The second average might be more trusted because there is more consensus around a particular rating (a lower deviation).
(*In practice, some albums can have several thousand ratings)
This album has a Bayesian average rating of 70.6/100, a mean average of 69.7/100, and a trimmed mean (excluding outliers) of 70.5/100. The standard deviation for this album is 15.4.

The whole theme and storyline is a bit played out but this album still holds a place in my heart, I remember it as a very emotional teen still in the throes of puberty and the peak of insecurity. Funny, but true, and this was also somewhat a little bit of a window into the indie world for me.

Angels, Tides and Our Song stand out. Not as strong as their debut but still a good solid album

not as good as their first but pretty close. also its so damn chill

A solid follow-up to "xx", but strips the minimalist sound back further, and as result this sounds a bit like a band heavily influenced by the xx's debut.

Album number three will be a big one... top tier newcomers or one trick pony?

Still has the sound of their debut, but instead of subtle and soft-spoken, it's completely lacking a pulse. This is a shrug and a mutter.

Not as good as the first album, but still enjoyable.

Hard not to be disappointed after their first brilliant record. But let's be honest, it's still a good record they made.

Your feedback for Coexist