I See You (studio album) by The xx 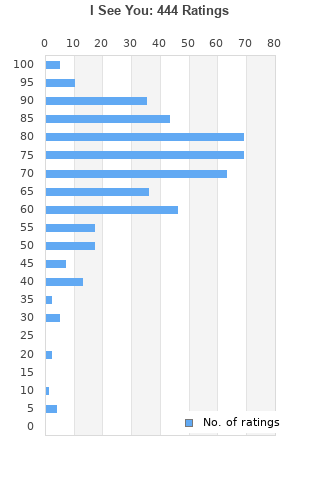 The XX / I See You Vinyl Box Sets
Condition: New
Time left: 1d 1h 16m 14s
Ships to: Worldwide
$111.93
Go to store
Product prices and availability are accurate as of the date indicated and are subject to change. Any price and availability information displayed on the linked website at the time of purchase will apply to the purchase of this product.  See full search results on eBay

I See You is ranked 3rd best out of 3 albums by The xx on BestEverAlbums.com.

The best album by The xx is xx which is ranked number 288 in the list of all-time albums with a total rank score of 6,848. 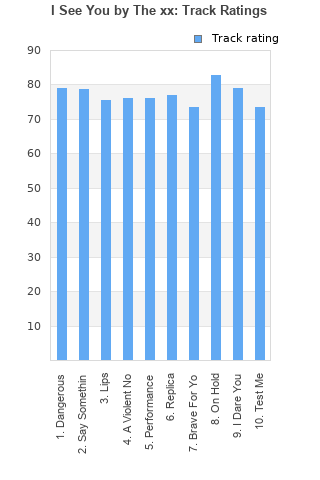 I See You rankings

I See You collection

I See You ratings

Rating metrics: Outliers can be removed when calculating a mean average to dampen the effects of ratings outside the normal distribution. This figure is provided as the trimmed mean. A high standard deviation can be legitimate, but can sometimes indicate 'gaming' is occurring. Consider a simplified example* of an item receiving ratings of 100, 50, & 0. The mean average rating would be 50. However, ratings of 55, 50 & 45 could also result in the same average. The second average might be more trusted because there is more consensus around a particular rating (a lower deviation).
(*In practice, some albums can have several thousand ratings)
This album has a Bayesian average rating of 71.4/100, a mean average of 70.3/100, and a trimmed mean (excluding outliers) of 71.3/100. The standard deviation for this album is 15.9.

I See You favourites

I See You comments

Song writers Romy Madley Croft and Oliver Sim continue the lyrical themes of love , heartbreak and anguish and with the stylish production of none other than Jamie xx it makes for an intoxicating mix which is clearly one of 2017's best releases

Sexier than a week-end away with your partner

I was thoroughly bored. Wasn't bad, but 2 listens in and I'm like, yeah, this ain't getting better.

There some sleepy tracks here that I do not care about (which is what I expect from The XX anyway), but I still think this is their best album yet as it contains vibrance and more engagability which its predecessors lacked. Highly recommended.

Best Tracks: Dangerous, A Violent Noise, Replica, On Hold, I Dare You

It seems like after the stunning Jamie XX's record, the band has change slightly direction. Now they are more disco oriented and less heavenly.
Btw, 3/4 of the record is very good, some tracks could be useless, instead of other two bonus track that are stronger.

I remember listening to In Colour minding my own business when I started looking information about the artist. When I realized Jamie xx had that double X at the end for a reason, I was surprised as the previous albums from The XX have always seemed uninspiring for me with a few OK tracks (I haven't even rated them as I have not taken interest of listening to the albums more than once). When I saw they were to release a new album together once again I expected Jamie to lead the way as he had shown superiority at his own, but it seems like no, they went back to their old selves: an okay album with okay tracks, average electronic-indie-emodrama that is not crap but does not shine either. I hope Jamie goes back to his own again.

I still feel like the band is lacking substance on this 3rd major project.

About par for the course for the XX who have impressed over the years but haven't come across with anything mind blowing. They try to be this mix of indie rock with a decent amount of accessibility, experimenting a little outside of their comfortable zone on this latest record. Not substantial yet doesn't fall to mediocrity.

I've really come to appreciate this album over the last few months since its release, and I think it might be the best thing The XX have done so far.

Strong opening tracks, a gorgeous sound courtesy of the great production on the album and a surprisingly interesting story played out through the lyrics; it's everything you'd expect from an indie album and more.

Its weakness really lies in its middle section. While individual songs are good, the whole pace slows and it becomes quite dull, sad to say. That said, it's very consistent in its quality generally speaking, though there are certainly tracks that stay with you more than others.

Where it really does well is in its mellow electronica underpinnings; they feel fresh and are combined well with the echoey vocals and sharper sounds found throughout the tracks. The result is something that sounds complex without being overcomplicated, and I like that.

I See You is weak in its pacing, but where it does well, it's an incredibly strong release. An excellent album from the London trio, for sure.

Your feedback for I See You