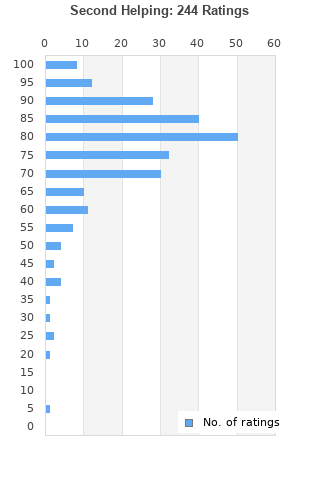 LYNYRD SKYNYRD SECOND HELPING JAPAN SHM MINI LP CD.NEW
Condition: New
Time left: 2h 44m 29s
Ships to: Worldwide
$89.99
Go to store
Product prices and availability are accurate as of the date indicated and are subject to change. Any price and availability information displayed on the linked website at the time of purchase will apply to the purchase of this product.  See full search results on eBay

Second Helping is ranked 2nd best out of 38 albums by Lynyrd Skynyrd on BestEverAlbums.com.

The best album by Lynyrd Skynyrd is (pronounced 'lĕh-'nérd 'skin-'nérd) which is ranked number 434 in the list of all-time albums with a total rank score of 4,522. 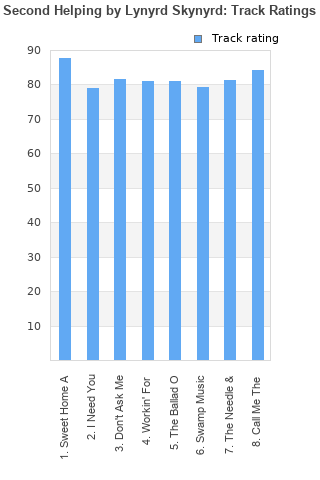 Rating metrics: Outliers can be removed when calculating a mean average to dampen the effects of ratings outside the normal distribution. This figure is provided as the trimmed mean. A high standard deviation can be legitimate, but can sometimes indicate 'gaming' is occurring. Consider a simplified example* of an item receiving ratings of 100, 50, & 0. The mean average rating would be 50. However, ratings of 55, 50 & 45 could also result in the same average. The second average might be more trusted because there is more consensus around a particular rating (a lower deviation).
(*In practice, some albums can have several thousand ratings)
This album is rated in the top 3% of all albums on BestEverAlbums.com. This album has a Bayesian average rating of 77.9/100, a mean average of 77.0/100, and a trimmed mean (excluding outliers) of 78.1/100. The standard deviation for this album is 14.3.

Fun southern rock album that is spotty in places but generally holds up pretty well. Of course Sweet Home Alabama is timeless, but the best song on the record is Call Me the Breeze. Workin' for MCA is also an underrated, blistering gem. A good choice if you just want some good time rock 'n' roll.

Not quite up to the level of the debut, but there's plenty of classics here.

Great album, the first two tracks and the last two are the best.

Great album. Not as good as their debut in my opinion but fantastic still. The best cuts are Sweet Home Alabama, The Ballad Of Curtis Loew, and Call Me The Breeze. No bad songs to be found here.

Favoritas: Sweet Home Alabama, The Ballad Of Curtis Loew, I Need You

Lynyrd Skynyrd's second album is an excellent follow up to their brilliant debut. Kicking off with the band's most successful single, sweet home Alabama, a rock classic, the record never lets up. Workin'for MCA, is a great cynical look at the music business, don't ask me no questions, is a strong cut, and the cover of J.J. Cale's, call me the breeze, is fantastic. The playing here is superb, all in all, another classic skynyrd LP.

I think this album is even better than Pronounced, which was damn good. One of the best sophomore albums of all time.

Very good album that's just a notch lower than their fantastic debut. Plenty of good music here for fans of the debut.

Your feedback for Second Helping