The Carpenter (studio album) by The Avett Brothers 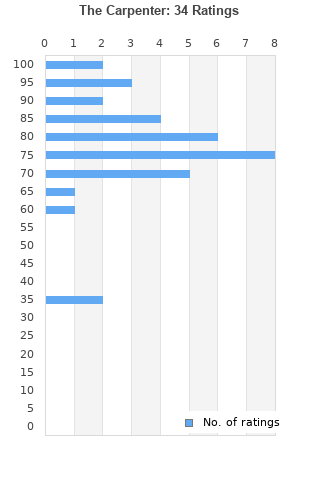 The Avett Brothers : The Carpenter CD Album (Jewel Case) (2012) Amazing Value
Condition: Very Good
Time left: 2d 23h 30m 42s
Ships to: Worldwide
£2.55
Go to store
Product prices and availability are accurate as of the date indicated and are subject to change. Any price and availability information displayed on the linked website at the time of purchase will apply to the purchase of this product.  See full search results on eBay

The Carpenter is ranked 4th best out of 14 albums by The Avett Brothers on BestEverAlbums.com. 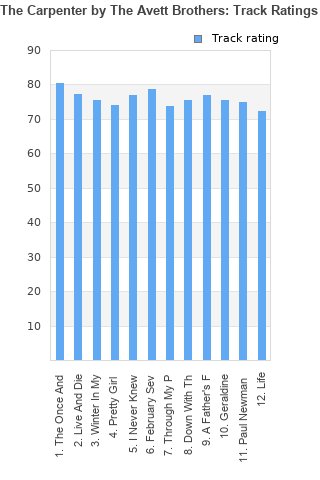 Rating metrics: Outliers can be removed when calculating a mean average to dampen the effects of ratings outside the normal distribution. This figure is provided as the trimmed mean. A high standard deviation can be legitimate, but can sometimes indicate 'gaming' is occurring. Consider a simplified example* of an item receiving ratings of 100, 50, & 0. The mean average rating would be 50. However, ratings of 55, 50 & 45 could also result in the same average. The second average might be more trusted because there is more consensus around a particular rating (a lower deviation).
(*In practice, some albums can have several thousand ratings)
This album is rated in the top 7% of all albums on BestEverAlbums.com. This album has a Bayesian average rating of 76.3/100, a mean average of 77.1/100, and a trimmed mean (excluding outliers) of 77.1/100. The standard deviation for this album is 14.1.

Not as consistent as some other albums but enjoyable nonetheless. These are two men very much in touch with their feelings. Perhaps that is why there are so many ladies in the audience at concerts. Still, I really enjoy them and hope to one day see them live.

Rick Rubin has managed to polish all the band's rough edges right off. Personally, I liked them a little more raw than what we're given here. But I can't be too mad, given that the Avetts said their early lo-fi sound only came from being too broke to do it right. Besides, no matter how much shine you put on or take off, these two are some of the finest lyricists in the business.

Amazing music. Yes, their most commercially accessible album to death but don't think they're pulling a Maroon 5. Rick Rubin is a good fit for producer and there are some truly wonderful songs on here.

This album is an absolutely phenomenal effort from a band that has become one of my absolute favorite bands around today. Few bands to me have the musical and lyrical ability that The Avett Brothers to. They can write a catchy song that you’ll be singing for days and you’ll never even realize that they lyrics you’re singing can be beautiful poetry. There is one thing very different about this album from other Avett Brothers albums and it’s the featuring of electric guitar. They feature it quite a bit more than they usually do and it works perfectly. This album is absolutely phenomenal. I’ll close with a quote from the San Francisco Chronicle I once read that I think describes The Avett Brothers perfectly: they have the “heavy sadness of Townes Van Zandt, the light pop concision of Buddy Holly, the tuneful jangle of The Beatles and the raw energy of The Ramones."

These guys have always been obsessed with death -- their biggest hit to date was the emphatic "die, die, die". But on "the carpenter", they are focused on rebirth after death (as jesus was the most famous carpenter). The album travels through the "winter of the heart", with other songs titled "live and die" and "february seven", and emerges at the end at "a fathers first spring" and "life". Content-wise, this is another solid, tuneful avett brothers release. (But it could really use female backing vocals on some harmonies.)

Your feedback for The Carpenter