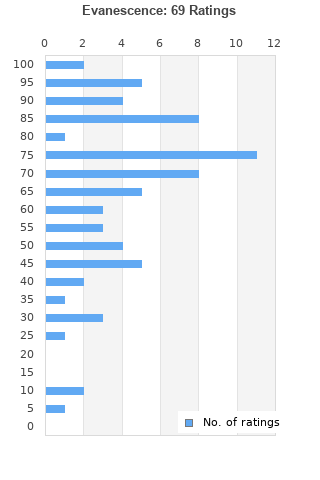 Evanescence is ranked 3rd best out of 9 albums by Evanescence on BestEverAlbums.com.

The best album by Evanescence is Fallen which is ranked number 1087 in the list of all-time albums with a total rank score of 1,693. 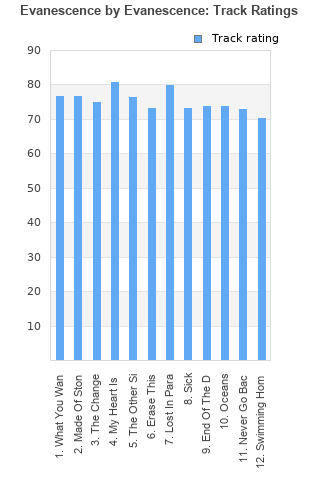 Rating metrics: Outliers can be removed when calculating a mean average to dampen the effects of ratings outside the normal distribution. This figure is provided as the trimmed mean. A high standard deviation can be legitimate, but can sometimes indicate 'gaming' is occurring. Consider a simplified example* of an item receiving ratings of 100, 50, & 0. The mean average rating would be 50. However, ratings of 55, 50 & 45 could also result in the same average. The second average might be more trusted because there is more consensus around a particular rating (a lower deviation).
(*In practice, some albums can have several thousand ratings)
This album has a Bayesian average rating of 67.0/100, a mean average of 66.1/100, and a trimmed mean (excluding outliers) of 66.1/100. The standard deviation for this album is 22.9.

The production on this record is awful, everything is compressed. Real sounds from real instruments please.

The third and final release from this mostly generic, but mostly enjoyable nonetheless, post-grunge-goth-rock nu metal outfit manifests itself as a far more mature effort than previous releases. That's clear from the creative direction Lee took on this one - smarter poetry, combining electronic elements into the mixture of very much Evanescency grinding guitars, and of course, Lee's signature vocals, which are broad and impacting.

These new elements, professes Lee, were inspired by the likes of electro-pop acts like MGMT, as well as classic trip-hop figures like Portishead, Massive Attack, and Bjork. And while I do appreciate that these provide abstraction and a new dimension to the sound, and while I can admire Lee's soul-searching efforts - a perquisition which fostered a love for spectacular music and an influential seedling within her mind - the album still reeks of a penchant for muddy guitarwork, sprinklings of piano, and weeping classical strings in favor of such sophisticated nuances. I don't hear these new electronic ideas presented as strongly or as passionately as Lee describes her newfound appraisal of trip-hop and electronic artforms, but some elements do creep into the mix. The potential of the eponymous album is clearly never fully realized, because the creative direction doesn't /really/ transform considerably; Lee's (et al) lyrics, on the other hand, became more cultivated with time, correlated with her evolution, from "where [she] was at that time of [her] life" during the production of Fallen and The Open Door.

A stronger set than the previous album. Feels like going to the opera when you listen to this group. While on many songs I find it hard to understand the lyrics, there are some merits here. They place a nice formula. Oceans was a standout. All said... band doesn't do it for me.

I was a very casual Evanescence fan prior to this release. This album blew me away. This is a real band effort. The songs flow into one another and the execution, production, and muscianship are flawless. The self titled LP is a masterpiece of songcraft. Truly underrated. The album should be a staple of every rock fan's collection.

Your feedback for Evanescence