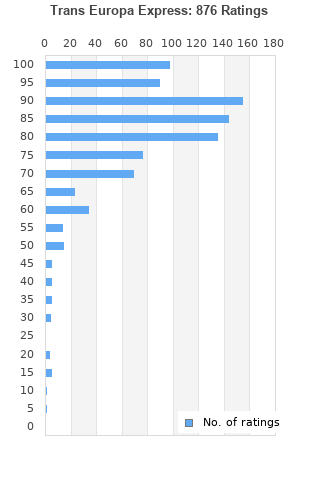 Trans Europa Express is ranked as the best album by Kraftwerk. 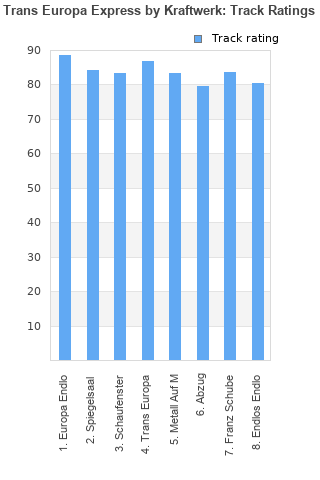 Rating metrics: Outliers can be removed when calculating a mean average to dampen the effects of ratings outside the normal distribution. This figure is provided as the trimmed mean. A high standard deviation can be legitimate, but can sometimes indicate 'gaming' is occurring. Consider a simplified example* of an item receiving ratings of 100, 50, & 0. The mean average rating would be 50. However, ratings of 55, 50 & 45 could also result in the same average. The second average might be more trusted because there is more consensus around a particular rating (a lower deviation).
(*In practice, some albums can have several thousand ratings)
This album is rated in the top 1% of all albums on BestEverAlbums.com. This album has a Bayesian average rating of 82.8/100, a mean average of 81.7/100, and a trimmed mean (excluding outliers) of 82.9/100. The standard deviation for this album is 15.0.

Definitely ahead of its time electronic music that puts you in a trance. You feel like on a mad train, because of the haunting atmosphere that is most present on The Hall Of Mirrors and Metal On Metal.

Tangerine Dream, Jean Michel Jarre and Kraftwerk were all pioneers of electronic music each with their own individual styles. I like all three for different reasons. Each produced a number of classic albums in their early career and this was top of the tree for Kraftwerk. Each of the artists mentioned were using similar synths and drum machines around the time. However the results were quite different, the Kraftwerk sound being most structured and linear, a clean uncluttered sound and obviously with vocals, which TD tried once or twice but didn't really return to, not sure JMJ ever did. Always with a nod to the robotic influence, Kraftwerk delivered an album which would be the ideal accomplament to a journey on the Trans Siberian Express.

For me the greatest electronica album of all time, a really cool concept which has a timeless quality to it that a lot of Kraftwerk's records have

One of those albums I wish I had the chance to listen to them when they came out, I'm sure it would have been huge.

I was expecting this to be a lot weirder than it was after hearing Autobahn.

this should be the first Kraftwerk album you listen too.if you get this,you will love Kraftwerk.

This album is a journey, excellent album
all the mysticism and dark power this contains is awesome

Your feedback for Trans Europa Express